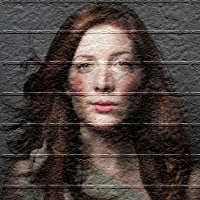 A minor alchemical miracle at the Arcola, where they've learned the secret of turning gold into base metal. The gold is in them thar hills - it's the tail end of the American gold rush, which has reached as far as Alaska. The base metal is the leaden thunk of everything else about Karen Ardiff's breathtakingly inept first play In Skagway. Frankie (Angeline Ball) was a terrible actress who, possibly by accident, gave one good performance and traded on it the rest of her life. May (Geraldine Alexander) was her adoring flunky who tirelessly accompanied her around the United States, along with May's daughter T-belle (Kathy Rose O'Brien.) For reasons unknown to god or man, the trio wound up in Skagway, Alaska, where T-belle became a prospector and Frankie had a stroke, leaving her babbling incoherently or, to put it another way, making more sense than any of the other dialogue.

With Frankie confined to a wheelchair, May has put all their money into a stage to get her performing again, something that T-belle twigs might be slightly awkward under the circumstances. So she enlists local prostitute Nelly (Natasha Starkey) to do the dance for them. I'm not saying Nelly seems untrustworthy, but if she had mustaches she would have twirled them. The characters spend ninety minutes exchanging B-movie clichés - "The sky just seems bigger here somehow!" "I looked into the Indian's eyes and I don't know why but I... trusted him." Every so often there's a flashback or a dream sequence where people wander around with doilies on their heads.

Director Russell Bolam expertly steered Philip Ridley's intricate Shivered but he's at a loss to nail down this demented stream of consciousness. Naturalism is abandoned then embraced again mid-scene, and a voiceover announces I WANT SOME FUCKING CHEESE in the middle of an unrelated sentence (exactly how mentally aware Frankie is inside her incapacitated body varies from scene to scene depending on what the plot requires.) Somehow Geraldine Alexander manages to hold onto a little quiet dignity while all around her Deliberately Bad Acting For Comic Effect merges seamlessly into The Other Sort Of Bad Acting. I may or may not have bumped into another blogger there. We may or may not have spent the last half-hour trying, and failing, to stifle giggles.

In Skagway by Karen Ardiff is booking until the 1st of March at Arcola Studio 2.