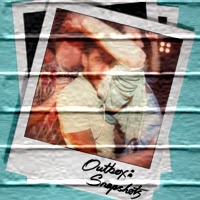 Something a bit different to my usual reviews of fully-staged shows, this was a one-off performance of short gay and lesbian plays from Outbox, a company that stages work from all-LGBT writers, creatives and actors. Don't Cock It Up by Frazer Flintham is a bit of a dig at gay theatre in general, in which a playwright tries to make a commentary on how gay plays are shallow and focused on just sex; only to have the producers remove the commentary and make his play just about sex. Frog Stone's Waiting for Yoko sees two women who don't know each other well, waiting for their mutual friend to arrive so they can go to the titular concert. While they wait for her, Alex (Victoria Jones,) tries to put Jen (Stella Taylor) off dating the woman she herself is still clearly in love with. Then comes the reason that I and three of my Twitter friends dragged ourselves to Dalston on a Sunday night, a new Tom Wells monologue, My number 1 favourite lesbian.

This is followed by Alexi Kaye Campbell's Expectations, and a bit of an underwhelming finale in Yasmin Zadeh's Off., a lesbian relationship told out of sequence in rhyming couplets that goes on rather too long. Outbox: Snapshots is billed as bringing together a mix of emerging and established LGBT writers, and although there's promise in the others, it's the two established ones who come off the best: Wells' piece doesn't disappoint; it's the least overtly gay-themed of the quintet, dealing more, as he's so skilled at doing, with outsiders in general. Tim Jackson's Mark spends New Year's Eve quietly alone in front of the TV, and reminisces about the titular character and the disastrous time they had together the previous year. It's warm and quietly brilliant, and Jackson instantly gets the trademark rhythms of Wells' speech - I'd like to see him appear in a full-length Wells play.

And then Alexi Kaye Campbell's playlet is an absolute riot, in which Isaac Jones and James Robert-Moore play two men meeting in the flesh for the first time after flirting for months on a website (I guess things are going well for Campbell and Dominic Cook's relationship if he thinks this stuff's still done on websites; it's all apps these days. I'm told.) As they dissect the numerous, increasingly ridiculous lies about themselves they've told online to seem more desirable, what starts out pushing them apart ends up a bonding experience. It's punchy and hilariously accurate.

Of the three writers I was unfamiliar with Frog Stone seems the most promising, Waiting for Yoko has a clearly defined and witty voice, and if Stone can tighten up her writing a bit (the development over her three scenes felt like it could have been achieved in two) she could be one to watch.