Theatre review: What the Women Did

Southwark Playhouse is the latest venue to commemorate the First World War's centenary, and does so with a trio of plays by different writers that all look at some aspect of women's experience of the Great War. Although it's perhaps a bit unfortunate that each play in What the Women Did deals with women in terms of their relationship to men - first as wives, then as single women who've found the pool of available men suddenly diminished, and finally as mothers. And it's an odd little triple bill, in which the final segment is so superior to the other two it seriously overbalances the evening. But first up we've got Gwen John's Luck of War, which takes place in T'North, where Ann's (Victoria Gee) husband has been missing in action long enough to be declared legally dead, and for Ann to remarry.

So, worried about how she'll support her three children, Ann marries Amos (Memorable Actor Matthew Cottle,) which is of course when first husband George (Simon Darwen) reappears, one leg lighter but definitely alive. It's an interesting idea but as the way John handles it is to have a load of characters shout at each other for half an hour I felt like I was watching a bad soap opera. And I appreciate that it's hard to make an actor's leg disappear in a low-budget fringe production, but perhaps a couple of minor script tweaks would have been better than having characters constantly reference George's missing leg, which is quite visibly bandaged up, propped up on a chair, and definitely still attached to the rest of him. 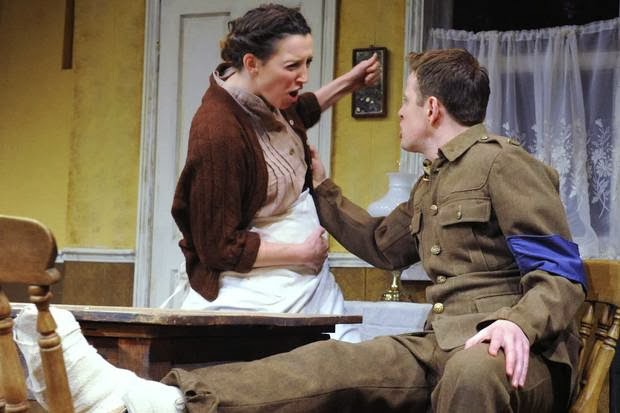 "Nice idea, shame about the execution" applies almost as much to Handmaidens of Death by Herbert Tremaine (the pen-name of Maude Deuchar.) A group of young unmarried women grumble about how they're becoming old maids because the War is killing off all the available men, and bitch about those girls who have managed to secure a husband. But they work in a munitions factory, and the second scene confronts them with their own part in the bloodshed. This second scene, played out in almost complete darkness, is tensely directed by Tricia Thorns and effective, but suffers from giving away its plot twist way too early. (I did also wonder, in the first scene, if an unfortunate combination of makeup and lighting had left the women looking like they'd been basted in turmeric; but according to the programme notes, TNT poisoning gave munitions girls jaundice, so it was obviously deliberate.) 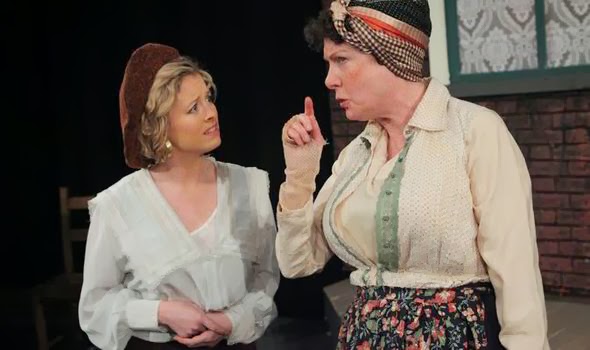 We're in an entirely different league after the second interval, as the final piece justifies the trip to Elephant and Castle by itself: We're in the basement flat of Mrs Dowey (Susan Wooldridge) where she and three other char ladies are discussing their brave sons at the front. In a very funny opening scene the old ladies get competitive about whose son is bravest, who writes home most often, and who's got the hairiest legs. But Mrs Dowey's got a secret: She never married or had children, and simply picked the name of a Black Watch soldier out of the newspaper to claim as her son so she could feel part of the war effort. So it's a shock when her until-then fictional son Kenneth (Simon Darwen) actually turns up. 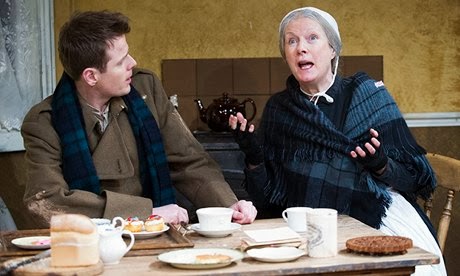 J.M. Barrie's The Old Lady Shows Her Medals is a real little gem, funny, charming, played with real chemistry by Darwen and Wooldridge, and culminating in a beautifully moving, silent final scene. It overshadows the other two playlets to the extent that it feels like they were only staged here at all because the Barrie was too short to put on alone. So a couple of underwhelming pieces here, but well worth sticking with to get to the memorable finale.

What the Women Did: Luck of War by Gwen John, Handmaidens of Death by Herbert Tremaine and The Old Lady Shows Her Medals by J.M. Barrie is booking until the 15th of February at Southwark Playhouse's Large Theatre.