PREVIEW DISCLAIMER: The press get invited in tomorrow. 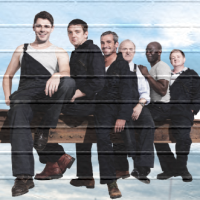 "Oh, I've seen that film, pure fantasy! People aren't unemployed, there's no such place as Sheffield, and anyway, you don't even get to see their cocks at the end!" The thoughts of Shirley Bassey (via Matt Lucas) on The Full Monty, the 1997 film comedy that permanently changed the meaning of the title phrase: "The full monty" used to be a generic expression similar to "the whole hog" or "all the way," but now it exclusively means full-frontal nudity. And I just can't imagine why that sort of thing would be of interest here. There's already been a (not very highly-regarded) musical adaptation, which may explain why it took until 2013 for another attempt to stage it. But Daniel Evans went back to original screenwriter Simon Beaufoy for his Sheffield production last year, which then toured the UK; and that's the version that's now made it to the West End.

Sheffield's whole identity was tied in with its steelworks, so when Thatcher's policies saw them closed, the newly-unemployed steelworkers were left with nowhere left to turn. Gaz (Kenny Doughty) and Dave (Roger Morlidge) are reduced to stealing girders from the factory where they used to work. When Gaz realises that not being able to pay his child support might result in not being allowed to see his son, he comes up with a last-resort plan: To compete with the Chippendales with their own strip show, and to make up for not having their muscles by going full frontal. 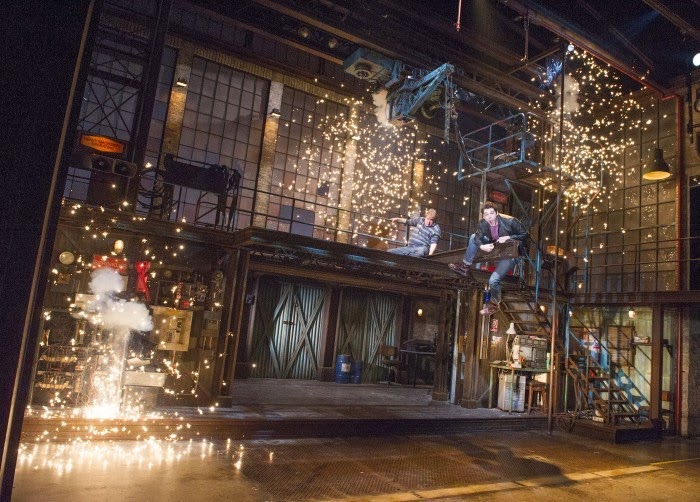 Beaufoy's story is equal parts funny and sweet, its politics unmistakable (despite the general lack of work, the only jobs available being at the local Conservative club make the protagonists unwilling to take them; and a bust of Margaret Thatcher comes in for various indignities) but made a backdrop rather than a lecture. Doughty makes for an endearing lead who, like all of the cast, forges his own identity with the character that distances him from the portrayal in the film. Robert Jones' set of the dilapidated factory also gives Evans' production its own identity, and yet a lot of excellent work in making the play stand alone doesn't quite shake off the film's ghost. 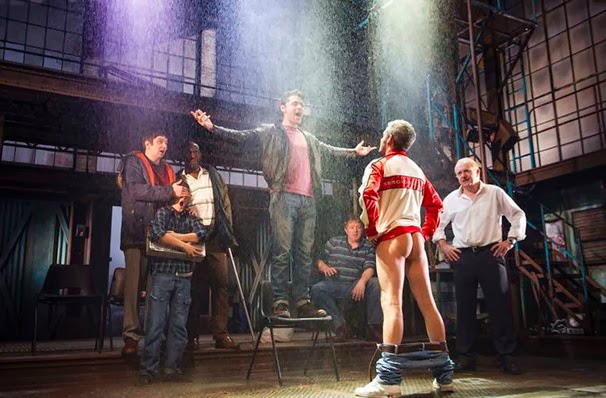 Although the last time I saw the film must have been at least a decade ago, Beaufoy's script doesn't veer too far from his screenplay so I was often reminded of it. There are a few changes - he's fleshed out (fnar!) the relationship of the two gay characters, the comically well-hung Guy (Kieran O'Brien) and suicidal Lomper (Craig Gazey.) Although, Gazey's camp hangdog act may have got a lot of laughs tonight, but I've seen the same performance from him enough times now that I think "schtick" is a more accurate word. 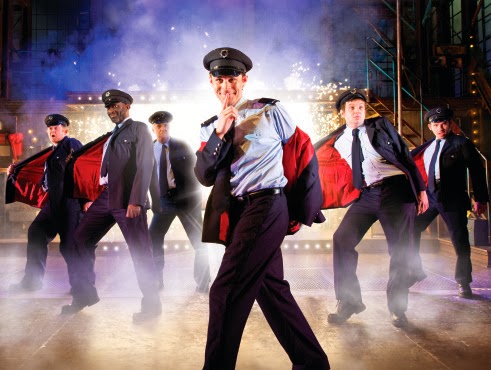 The production's finale is marginally less coy than the famously disappointing original, but only marginally - a
FULL-FRONTAL MALE NUDITY ALERT!
there may be, but the dreaded backlighting means that even from the front row of the circle there's nothing to see here. Well, except for O'Brien's, but anyone remotely familiar with his cinematic oevre will know all about that. Not that it seemed to dampen the hen party atmosphere - to make the most of the two-and-a-half hours of actual theatre before the two seconds of nudity, I'd recommend going early in the week like we did - I'm already hearing stories of wine boxes being snuck into weekend performances in handbags. So this is a weird one to know whether to recommend or not - there's nothing wrong with the show and indeed many really good moments. But I didn't come out feeling as if putting the story on stage had added anything to the film.

And anyway, you don't even get to see their cocks at the end!

The Full Monty by Simon Beaufoy is booking until the 14th of June at the Noël Coward Theatre.