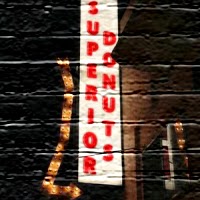 I imagine Tracy Letts is used to people assuming that he's a woman, especially with the likes of August: Osage County having plenty of good female roles. There's an unmistakeable dose of testosterone running through Superior Donuts though, as it receives its UK premiere at Southwark Playhouse's Little space. Ned Bennett directs the story of Arthur Przybyszewski (Mitchell Mullen,) an old hippie still running (in the loosest sense of the word) the donut shop established by his parents in the 1950s. Quite how he's managing to hold onto it is a mystery, as he seems to give away more donuts than he sells, the Russian who owns the shop next door (Nick Cavaliere) keeps trying to buy the premises off him and the place doesn't look the most hygienic - even if you discount the fact that when we first see the shop it's been broken into and vandalised.

Into this setup comes Franco (Jonathan Livingstone,) a young wannabe writer looking for a minimum wage job to help pay off his gambling debts. The unlikely friendship between him and Arthur as they work together forms the core of Letts' play. 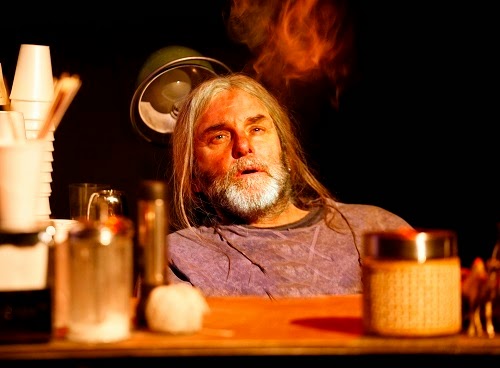 Franco is stuck on the idea of writing not just a novel, but The Great American Novel, and if there was such a cliché as The Great American Play it could be said that Letts was making a stab at that here too. Although set in a single small location over a period of a couple of months, there's an epic scope to the concerns in Superior Donuts that take in racial tensions and cultural identity, while the shadow of the Vietnam War that's  still present in so much American drama also looms heavy here. 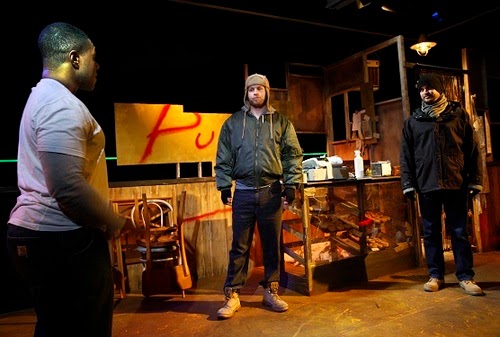 But from the first appearance of Livingstone's cocky Franco there's also a rich strain of humour to the play, with some very funny scenes coming from his and Mullen's chemistry. The play shifts abruptly at times between comedy, pathos and quite violent drama (fight director Owain Gwynn has choreographed a lengthy fistfight that's one of the more impressive stage punch-ups I've seen in a long time) and it's to Bennett's credit that it feels natural in his production, in the way that life can shift uneasily between comedy and tragedy. 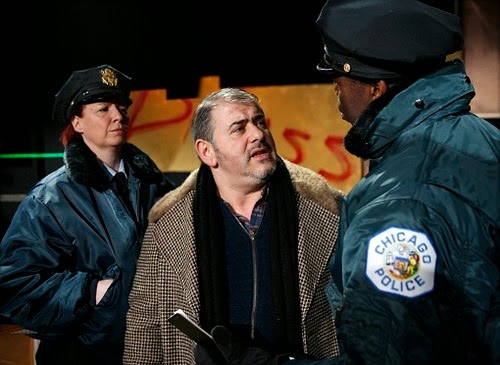 Arthur's clumsy flirtation with a lady cop (Sarah Ball) provides another lighter story arc to counterpoint the sometimes bleak areas his and Franco's storylines take them, and with strong performances throughout (Ian was marveling at the interval at Mullen's ability to well up with tears on cue) this is a piece of Americana that the author apparently thought might be too sentimental for a British audience, but which I thought pitched itself just right. You will end up hungry for doughnuts, but then again there's a late appearance from a particularly unappetising red velvet cake that should cure that. I know it's a red velvet cake, but it gave me flashbacks to yesterday's blinding of Gloucester, which surely can't be right.

Superior Donuts by Tracy Letts is booking until the 8th of March at Southwark Playhouse's Little Theatre.