Theatre review: For The Trumpets Shall Sound 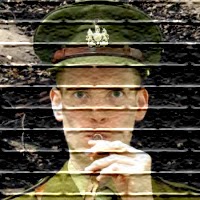 A break of an hour in The Vault's bar area (which smells OVERBEARINGLY of cloves - something's gettin' mulled to within an inch of its life in there) and then into another of the railway tunnels to see For The Trumpets Shall Sound, a look at gay love a century ago, when it being socially unacceptable was the least of your worries given there was a war on. James' (Tom Syms) 1916 diary documents his time on the Western Front and his first meetings with nurse Nora (Kayleigh Hawkins,) the woman who would eventually become his wife. But it also reveals his close friendship with fellow officer Robert (Ben Bridgeman,) Nora's cousin who's in love with James, and with whom he shares a drunken night's sexing.

Unfortunately I found little to recommend about For The Trumpets Shall Sound. Gaelle Stark-Ordish's dialogue is incredibly stilted, a quality that extends to the performances - at times the acting style feels like a Brief Encounter spoof, but done deadly seriously. A framing device in which James' granddaughter Ruth (Bil Rose) discovers his diary serves little purpose other than occasional moments of narration - and given how loath Ruth claims to be to delve into her grandfather's private life, she barely even reacts at the Surprise!Bumsex revelation, let alone stop reading.

The observations on WWI feel cobbled together from other works on the subject, and with so many other Great War plays this anniversary year a piece really needs to find its own voice so as not to feel redundant. But this isn't to be found in the relationship of the two men, a stiff-upper-lipped refusal to acknowledge their night together taken so literally that there's no distinction between their relationship before and after it. And with little to say either about the First World War, or about the lives of gay men fighting it, the whole enterprise quickly starts to feel pointless.

For The Trumpets Shall Sound by Gaelle Stark-Ordish is booking until the 22nd of February at The Vaults, Waterloo.