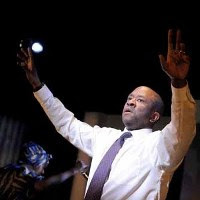 I've been unconvinced by Bola Agbaje's writing so far, but Indhu Rubasingham directing a cast including Noma Dumezweni and Lucian Msamati surely made Belong at the Royal Court Upstairs worth a look. Msamati plays Kayode, a Nigerian-born British MP who's just lost his seat thanks to some unwise Twitter comments that alienated other black voters. Returning to Nigeria for a holiday at his mother's (Pamela Nomvete) home, Kayode gets caught up in local politics when Mama's protégé Kunle (Ashley Zhangazha) introduces him to the corrupt Chief Olowolaye (Richard Pepple.) After getting on the wrong side of the Chief, Kayode experiences Nigerian police corruption first hand and decides to do something about it. He ends up running in local elections, much to the surprise of wife Rita (Dumezweni) who's still at home in London.

Some of the relationships aren't as well-defined as they could be, and a couple of plot developments are a bit clunky, but for the most part this is a big leap in Agbaje's writing. Her most considered and mature work so far, it deals with issues of identity as much as with Nigerian politics. It's not unusual, in a play that touches on race, to have a character saying that even British-born black people should go "back" to Africa; what's less usual is that instead of some card-carrying white racist this time it's coming from a Nigerian woman, intent on painting her country in a favourable light to bring successful people like Kayode and Rita there.

Though her central character is male, Agbaje creates a number of good female roles with Nomvete getting a lot of scene-stealing moments and giving good side-eye whenever someone doesn't meet with her approval, which is often (although she doesn't really pass as old enough to be Msamati's mother.) Dumezweni's Rita is beset from all sides, not just with the mother-in-law from hell but also with the ever-catty "friend" Fola, who may be trying to get Kayode back to Nigeria for reasons of her own; the exchanges of bitchy comments between Dumezweni and Jocelyn Jee Esien are among the more entertaining moments, as is Kayode's managing to get a busy market to listen to him by repeatedly shouting "Obama." Belong isn't entirely satisfying, but it does look into some interesting ideas and has strong performances.

Belong by Bola Agbaje is booking until the 26th of May at the Royal Court's Jerwood Theatre Upstairs.