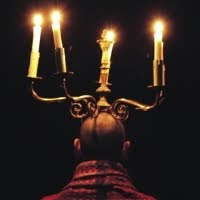 Not to let the Globe get all the international Shakespeares, the RSC opens the London leg of its contribution to the World Shakespeare Festival with a production from Brazil's Companhia Bufomecânica. Two Roses for Richard III is billed as an adaptation of Shakespeare's History Plays, although it's really just Richard III with the very occasional, fairly throwaway reference to the earlier plays in the sequence. The story's told in a highly visual acrobatic way, although I'm not sure the words "story" or "told" are the right ones here, as there's little attempt to actually tell a story, or to really match any given scene with the gimmick it's had foisted on it. And at the end I really didn't know what Two Roses was actually trying to be: Gimmicky production of Shakespeare's play? Surreal adaptation? Postmodern deconstruction, with the actress playing Margaret spending most of her final scene out of character, pondering on how to approach the role?

I'm all for theatre with ideas but I rarely thought Cláudio Baltar and Fábio Ferreira's ideas had much bearing on the play they're supposed to be directing. The show features people hanging from the ceiling, moving around in boar masks, both a
FULL-FRONTAL MALE NUDITY ALERT!
and
SEVERE VADGE WARNING
(the latter depending what side of the stage you're sitting on; I was spared) and two disappointingly underused towers descending from the heavens. Changing the order of scenes can work sometimes, but here Queen Elizabeth mourns the deaths of the Princes in the Tower long before they're even in the Tower, let alone dead. Richard himself is played by multiple actors, sometimes simultaneously, the character being indicated by a black ruff. He's played throughout by men, until just before the Battle of Bosworth when both Richard and Richmond get a sex change, the actress now giving Richard the limp none of the previous actors had bothered with. And for all the bold visuals the designers (Rostand Albuquerque, Rosa Magalhães) and actors create, this is still mainly told through the text (in Brazilian Portuguese) and since the actors largely speak in a flat, declamatory style, this ends up being a pretty dull evening looking at the surtitles.

The only scene that really worked for me was the murder of Clarence, an atmospheric moment with him (or "him," as he's also a woman at this point) holding onto a slowly spinning ladder with the murderers circling him on ropes. But the shared Richard/Richmond dream sequence has the ghosts suspended around the stage, and tellingly, as well as the translation back into English, the surtitles have to tell us which of the rivals each line is being delivered to. And if you need to clarify who's speaking to whom because it's not apparent from the staging, maybe you chose the wrong staging. At the end, a character who's some kind of cross between Richard, Duke of Gloucester and Gloucester from King Lear arrives on stage carrying a toy horse, just to drive home the point that somewhere in this show's development, someone got very confused.

Two Roses for Richard III, based on Richard III by William Shakespeare, is booking until the 23rd of May at the Roundhouse.