Theatre review: What the Butler Saw

PREVIEW DISCLAIMER: This one opens to the press next week. 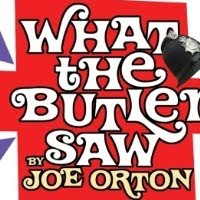 Farce is definitely back in fashion at the moment and the latest classic to get a revival is Joe Orton's typically twisted take on the genre, What the Butler Saw. Sean Foley, fresh from success with The Ladykillers, directs a cast of familiar faces at the Vaudeville. Tim McInnerny is Dr Prentice, the randy head of a psychiatric clinic, whose interview of potential new secretary Geraldine (Georgia Moffett) includes a full medical checkup, for which they will both need to remove some clothing. When his wife (Samantha Bond) arrives unexpectedly, Geraldine becomes only the first of a number of half-naked people Prentice will end up trying to hide, soon to be joined by Nicholas (Nick Hendrix,) the bell-boy from a seedy nearby hotel, and Sergeant Match (Jason Thorpe,) who's looking into crimes Geraldine and Nicholas may be connected with. The final complication is Dr Rance (Omid Djalili,) here to inspect the clinic, but mainly concerned with interpreting the various dodgy goings-on in terms of bizarre mental illnesses he can put into a book.

Despite illicit affairs being their bread and butter, farces tend to be oddly cosy, something which Orton typically explodes by taking the sexuality to its extremes. So the plot revolves around rape, transvestism, accidental incest and Winston Churchill's cock and balls; while the middle classes of the 1960s got a few extra opportunities to clutch their pearls as religion and authority get their share of digs. Orton's viciously funny lines are a gift that means there's laughs to be had regardless of what the actual production is like.

But even if it's a farce that subverts the genre, What the Butler Saw is still a farce and needs to be performed with perfect timing if it's going to have the full effect. The good news is, especially in the first half Foley's production has got all the timing running like clockwork, even if the cast still seem a bit nervous at the challenge of getting it right. The play's action runs straight through but inevitably an interval has been shoehorned in (those little ice cream tubs won't sell themselves!) and as we return for the second half it does take a while to get the pace back; I think it's likely the cast will be able to sort this out in the remaining few performances before press night, but tonight ran for about 15 minutes over the advertised time so there was definitely a drop in pace somewhere. What's less in evidence is much variety: If you are going to stick to a single tone for two hours then "frantic" is probably the one to go for but there's no chance for nuance in this production.

The main offender is Djalili, whose Dr Rance is undoubtedly funny but who essentially shouts almost every line - at least the script features a few lines that can be conveniently used to comment on his BIG performance. McInnerny fares a bit better with the hassled, increasingly disheveled Dr Prentice, and Samantha Bond is of course awesome, especially as Mrs Prentice gradually gets more drunk. Although even this seemed to lose something after the interval. I've never particularly warmed to Georgia Moffett in the TV roles I've seen her in but she's well-cast here, as is Jason Thorpe as the policeman. Nick Hendrix (pictured) is very fit and frequently in a state of undress, although I wasn't quite sure about his performance to start with. He does come into his own more though once his character ends up drugged and wandering the halls in a party dress and ill-fitting wig. And people familiar with the play will be pleased to know that his character's
FULL-FRONTAL MALE NUDITY ALERT!
scene remains intact (as, so far as I could tell from the Upper Circle, does Hendrix's special area. Which isn't quite of Sir Winston's proportions, but certainly looks fit for purpose.)

What the Butler Saw is a supremely funny play and one I've yet to see fail. Foley's production does everything it needs to do to make it work, but not much more. Chances are you'll laugh a lot, especially if the play's new to you, but perhaps a little bit more spark will develop by next week to take it into the levels of hilarity the play's capable of.

What the Butler Saw by Joe Orton is booking until the 25th of August at the Vaudeville Theatre.