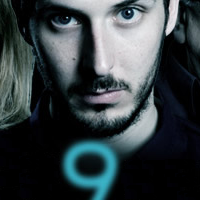 Director Tom Attenborough seems to be cornering the market in working with actors best-known for comedy, who want a chance to display a more dramatic side. After Ardal O'Hanlon in Port Authority, it's now The Inbetweeners' Blake Harrison who tackles a violent recovering alcoholic in Rob Hayes' Step 9 (of 12). Keith (Harrison) is on Alcoholics Anonymous' 12-step programme as part of his probation. Step 9 involves seeking forgiveness to those he's hurt in the past, although Keith's method of doing so seems to largely miss the point: Naming a past offense and then demanding that he be forgiven because "it's part of his recovery." He invites foster parents Alan and Judith (Barry McCarthy and Wendy Nottingham) to his crumbling flat to relive various events, from a knife attack that proved the last straw, backwards to try and find the origins of his problems.

Hayes' play has some very well-written moments but overall I found it quite problematic. Both Jim and I found it rather shapeless - the difference between a play that twists unexpectedly, and one that never seems to decide what it's actually about. A look into Alan and Judith's responsibility for how their foster son turned out feels a bit half-hearted, and Keith is such an unlikeable character that it's hard to focus any antipathy on anyone else anyway. McCarthy and Nottingham do very well though with characters whose motivations don't always make much sense.

Actors stretching themselves like this often has really exciting results but for me Harrison has overreached himself. Part of the problem's physical: I can imagine playing a teenager all these years has got frustrating, but as far as I could make out, Keith must be in his mid 30s at least¹, and it takes more than a beard to make a healthy-looking 26-year-old pass for a 36-year-old with a history of drink and drug problems. Although Harrison has his moments, I wasn't convinced, especially by his character's violent mood swings - his sudden bursts of anger don't carry any threat, and Jim commented afterwards that in his brief appearance Ben Dilloway, in another of the play's abrupt changes of direction, was much more convincingly frightening. (Of course, having just come out of Mercury Fur² Dilloway has a bit of an unfair advantage as far as inhabiting menace is concerned.) Step 9 (of 12) does offer a lot of food for thought and topics of discussion on the way out of the theatre, but unfortunately the more I think about it the more holes I find to pick in it.

On a completely different note though, new theatrical meme for 2012: Macabre uses for a Sainsbury's Bag For Life! (As well as this show, the RSC's current King John also uses one in a different way to the one intended by the shop.)

¹correct my maths if I've got it wrong, but we're repeatedly told he didn't leave the foster home until he was 25; he then apologises for the fact than when Alan and Judith finally got rid of him, he left a baby of his own with them; and at the time of the play his daughter's in "big school" which means she's what, at least 11?

²and presumably about to go straight back into it when it transfers to this very theatre at the end of the month?
Posted by nick730 at 17:08