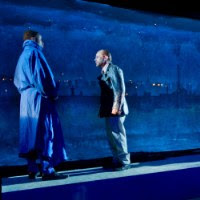 It's all a bit bombastic upstairs at Hampstead at the moment, but downstairs things are a whole lot quieter, and a great deal odder. Nick Whitby's The Complaint is set in an unspecified country - there's mostly a Middle-Eastern feel, but each character has a different international accent, sometimes even changing accent depending on who they're talking to. Afra (Zora Bishop) has an appointment in an office of "The Society," to discuss a complaint form she's submitted. The levels of bureaucracy she now encounters from a trio of administrators (Nathalie Armin, Peter Bankole and Callum Dixon) take her on a self-consciously Kafkaesque journey that takes in revolutionary politics, torture and the meaning of Art.

There's something very enjoyable about Whitby's gently surreal tale, helped hugely by the cast committing to its po-faced oddity. Afra is a problem for The Society partly due to her unpredictability - she's as likely to stand outside the situation and see the comedy in the endless tangles of red tape she's up against, as she is to matter-of-factly sign a Terms & Conditions form absolving The Society of guilt should they happen to assassinate her. Simon Usher's production creates a gently amusing surreal atmosphere, although perhaps the play is slightly too long to maintain a pretty consistent pace through, and at times I was briefly bored. But along with the gentle humour and occasional disquieting moment Whitby has thrown in some great lines of dark humour - the gag about the Jewish wedding had me, and others in tonight's audience, in stitches.

Just why I liked this is kind of hard to pin down; even harder to put my finger on is what it's all about. The politics of torture, the banality of evil and the way people can be worn down by appalling circumstances until they accept them as inevitable, are all touched upon, but by the end it really could all be about administration and red tape itself. I imagine some people might be frustrated by the play's obliqueness, or be unimpressed by the extent to which it borrows from Kafka. Personally, The Complaint kind of charmed me.

The Complaint by Nick Whitby is booking until the 16th of June at Hampstead Theatre's Michael Frayn Space.