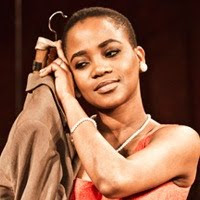 In Sophiatown, a township of Johannesburg in the 1950s, a husband (William Nadylam) returns early from work to find his wife (Nonhlanhla Kheswa) in bed with another man. The man flees in his underwear, and as punishment, the husband makes the wife keep the suit he's left behind: It's to stay in their house forever as an honoured "guest," to sit with them at mealtimes and be taken for walks. Peter Brook, Marie-Hélène Estienne and Franck Krawczyk did a French-language stage version of Can Themba's short story several years ago, and now they've created a new version of The Suit in English. It's a piece of storytelling theatre that failed to engage me in the least, a dreary hodge-podge of styles that stretches a very bare story over 80 minutes in a rather mournful way.

There's backing from three musicians, which occasionally rises to a lively jazz beat (and Kheswa's three songs are by far the best bits of the show, I'd have happily stuck them on my iPod if I could) but for the most the music is soporific, the chances of me falling asleep felt very real at times. Jared McNeill and Rikki Henry multitask all the remaining roles, often in quite a broad comical style: Occasionally the band or the odd audience member gets brought on stage to join the action, with a playful energy that feels like it would be a hit in a different show. But here it just jars with the earnest sobriety on display in the main story, and makes for another reason The Suit just doesn't fit. (But a woman in the front row gave it a standing ovation in floods of tears so there really is no accounting for taste.)

The Suit by Can Themba, adapted by Peter Brook, Marie-Hélène Estienne and Franck Krawczyk, is booking until the 16th of June at the Young Vic.