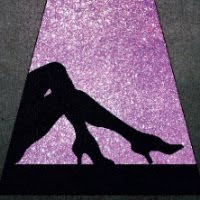 The Bush's new regime introduces two of its new Associate Artists, by pairing their existing one-woman shows in a double bill they're calling Encounters. Both shows originated in Edinburgh and have subsequently toured, and first up is Dry Ice, written and performed by Sabrina Mahfouz and directed by David Schwimmer (in a Q&A afterwards, Omar Elerian made reference to Schwimmer having directed it via Skype, a claim Mahfouz denied - I couldn't quite figure out if it was an inside joke or if Elerian had genuinely been told the show was directed via Skype.) Inspired by her time working as a waitress at a strip club, Mahfouz plays Nina, a lap dancer who narrates incidents from her life, stories about the other girls she works with and the "types" of men who come to watch them.

Originally a poet who started to incorporate more of a performance element, Mahfouz's play does often veer into verse, and there's some amusing lines and incidents, as well as the hint of how this way of life is affecting the narrator. Not being a trained performer may explain why Mahfouz is always just that little bit too understated, never quite creating enough energy to really suck you in. She's got a natural affinity for accents, which she uses frequently, but it does start to seem like the cast of characters is a collection of regional accents being shown off in place of characterisation. Dry Ice isn't bad, but it feels like it's just skirting around something interesting without delivering in the end. 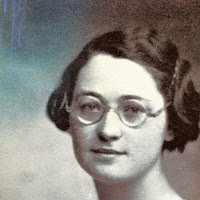 A big shift in tone after the interval for Caroline Horton's You're Not Like the Others Girls Chrissy, directed by Omar Elerian and Daniel Goldman. Horton plays Christiane, a young French woman trying to leave Paris to marry the English fiancé she hasn't seen in five years. It's 1945, Paris has been liberated but the War isn't quite over yet, and the severely short-sighted Christiane takes us through the last few years of Nazi occupation, with particular emphasis on her cross-Channel romance. Horton's enthusiastic, optimistic Christiane is a joy from the start as she relives her first trip to England (recommended because if she's somewhere where she can't read or write the language, she won't ruin her eyes further with constant studying) as well as the bittersweet circumstances of her return to France, and her life during the War.

Horton is aided by the luggage she drags everywhere with her, her handbag doubling as a tennis racquet in a particularly funny scene, the contents of four suitcases providing very silly backdrops for her various travels. Whether describing the heartbreak of years without word from her Cyril, or insisting that she once rowed from the Isle of Wight to mainland England, or single-handedly made up the French Resistance, Horton's Christiane is an engaging presence, and her (mostly) true story makes for a joyous show.

Encounters: Dry Ice by Sabrina Mahfouz and You're Not Like the Others Girls Chrissy by Caroline Horton is booking until the 12th of May at the Bush Theatre.