Theatre review: Written on the Heart 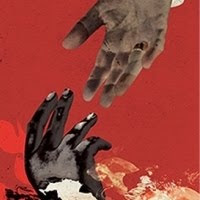 I was due to see Written on the Heart in a couple of weeks' time, but as the show is now closing on the 19th due to poor ticket sales my trip had to be rescheduled, and today's matinee was the only performance I could make. Years ago I enjoyed Pentecost, another RSC commission from writer David Edgar, so I was optimistic about this one, a belated entry to the 2011 celebrations of the King James Bible's 400th anniversary. Spanning 80 years, it focuses on Lancelot Andrewes (Oliver Ford Davies,) the Bishop of Ely and one of the senior members of the team trying to agree on an English translation of scripture in 1610; and the debt he owes to William Tyndale (Stephen Boxer,) who we see in a Flanders cell in 1536, awaiting execution for producing his own, colloquial translation of the Bible.

A play consisting of bishops arguing over the finer points of Hebrew-to-English translation may not seem very interesting. And it isn't. Written on the Heart didn't quite send me to sleep but I did feel the urge to nod my head and rest my eyes every so often. Things pick up a bit in the second act as Edgar has his protagonists meet, Tyndale's ghost visiting Andrewes and grumbling about the conservative phrasing choices the bishop is making. But for a play that frequently refers to people willing to be burned alive for their faith, there's a noticeable absence of passion. Directed by Gregory Doran, this two-and-a-half hours of beards flapping at each other doesn't exactly allay my fears of the RSC having made a less-than-exciting choice of new Artistic Director. I entertained myself by chuckling at the thought that everyone kept saying "potpourri is tyrrany!" God knows (regardless of what language he knows it in,) I had to entertain myself since the play had little intention of doing so.

Written on the Heart by David Edgar is booking until the 19th of May at the Duchess Theatre.