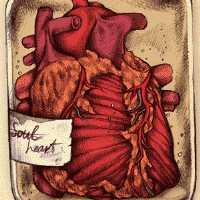 Though the weather's been hot lately, the Vault at Southwark Playhouse remains as chilly as ever if you need cooling down. The temperature's eerily appropriate in a story about dead bodies (reminding me of the rumour that these tunnels were used as a makeshift WWII morgue.) The Irish Giant, devised by the company Cartoon de Salvo, is inspired by Georgian anatomist John Hunter (Brian Logan,) a pioneering doctor with a preference for dissecting "abnormal" bodies - dwarves, hunchbacks - and a lack of scruples as to how to get hold of their corpses. When the eight-foot tall Irishman Charles Byrne (Neil Haigh) arrives in London to be exhibited to the public, Hunter becomes obsessed with securing his body post-mortem, and sends his shifty accomplice Harrison (Alex Murdoch, also directing,) to trail the giant in the hope of being there for his expected premature death.

The company tell the story in a combination of storytelling, song, magic (by Paul Murray - nicely designed illusions but a bit clumsily performed, the relevant mirrors and strings were always a bit too obviously visible) and animation (by Rebecca Hurst - the animation borders on being too cutesy at times but just about gets away with it.) At its heart is the old conflict of religion versus science, Byrne likes the idea of being able to help others after death, but it's not quite enough to overcome his fear that not being buried intact will harm his chances come Judgement Day. Though largely a charming, fun show, The Irish Giant has its moving moments and also goes into some dark ares, in the callousness of its protagonists - not just the lengths Hunter and Harrison will go to secure the body, but even in the blunt way they tell Byrne that men his size don't live long. Hunter eventually gets his own spiritual crisis, determined as his own death approaches to prove that the soul has no physical form in the body, and the autopsies are not, as his subjects fear, damning them. A lot of interesting ideas and a well-performed show, but not one I can see being hugely memorable.

The Irish Giant by Cartoon de Salvo is booking until the 9th of June at Southwark Playhouse's Vault.