Theatre review: The Lion, the Witch and the Wardrobe

PREVIEW DISCLAIMER: This is another show enjoying a Broadway-style long preview period. 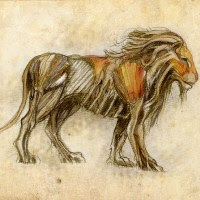 I didn't grow up reading C.S. Lewis' Narnia books, and my exposure to the stories as an adult hasn't made me a fan - I find the Christian allegory thunderingly unsubtle and the characters unlikeable. But the creative team of director Rupert Goold, Michael Fentiman (then assistant director, now promoted to share director credit with Goold,) designer Tom Scutt (whose 13 set I sort of wanted to marry) and composer Adam Cork (also of London Road fame) somehow made me love one of my least favourite Shakespeares, Romeo and Juliet. So could they perform a similar feat with The Lion, the Witch and the Wardrobe? No. I was at least hoping some of the religious "sub"text might be toned down a bit but from the opening where Lucy (Rebecca Benson) stands alone on stage to ask the audience if they believe in life after death, this was clearly not to be.

It's not that the production's actually bad, it's just a bit odd and lacking in wonder. The most insurmountable problem is the location itself: The threesixty theatre in Kensington Gardens is basically a huge circus tent, with a sophisticated stage in the middle, flying gear above and video projected onto all the walls surrounding the audience (rather lovely animations by Chris Randall, and I particularly liked the retro-looking stop-motion sequence; but ultimately not contributing quite as much to the overall effect as I would have expected.) The venue is utterly lacking in any kind of atmosphere, and however many Lion King-style animal puppets you throw at it can't change this. In fact by far the best scene in the play is the black mass in which The White Witch (Sally Dexter) who seems to have turned evil as a result of the unfortunate sinus problem that afflicts her every time she says the word "human," sacrifices Aslan the JesusLion on an altar - possibly because the low lighting makes you briefly forget the lifeless barn you're sitting in.

Of the creative team, the biggest disappointment is Cork, whose songs for the show are rather bland, and at one point require poor Forbes Masson as Mr Tumnus to subject us to several straight minutes of falsetto. (Masson isn't the only former EnsembleTM member reuniting with Goold here - David Rubin as Giant Rumblebuffin has a creature design that oddly resembles one of those road sweeping machines; and Most Inexplicable EnsembleTM Member Peter Peverley has a couple of lines as a fox before getting turned to stone. After which he plays a horse's arse. Sorry, I obviously meant "centaur's hindquarters.") A pre-recorded David Suchet provides the voice of Aslan (the puppet, operated by three actors, I quite liked, a design that sees him made up of gnarled trees.)

With the production not managing to overcome my preconceptions of the story, I was left remembering why the story irritates me in the first place. Apart from the Lion who dies for our sins and gets resurrected (subtle) I can't help wondering why anyone would be surprised Edmund (Jonny Weldon) is such a little shit. Given that all anyone ever says to him is "Edmund, you're such a little shit." And not just his insufferable older brother Peter (Philip Labey.) When the Professor (Brian Protheroe) takes the other kids aside, he's all "now think about it, Lucy said the wardrobe took her to a magical land, and Edmund said it didn't. Clearly one of these versions has a plausibility problem, and that version is Edmund's, because he's such a little shit." And then even Aslan explains that he got resurrected and won the war because he honourably gave up his life in exchange for that of a nasty little traitor (I know right, a self-righteous Christian, whatever next?) Of course, Edmund was on the White Witch's side long before he'd even heard of Aslan or knew she was a baddie, so technically only becomes a traitor when he goes over to Aslan's side. Yeah, think on that, JesusLion!

Aaaaanyway. You know, this show is probably exactly what I would have thought it would be if I'd known nothing about the creatives, and I would have steered clear. It's probably just Rupert Goold's work in the past that raised unreasonable expectations which sadly this show didn't come anywhere near fulfilling. Maybe next year they can do Prince Caspian. Not because I'd want to go, but because I could amuse myself by "accidentally" misreading the title as Prince Lesbian. I MAKE MY OWN FUN!

The Lion, the Witch and the Wardrobe by C.S. Lewis, adapted by Rupert Goold, is booking until the 9th of September at the threesixty Theatre, Kensington Gardens.