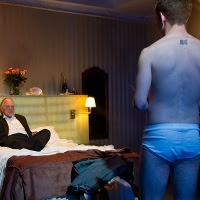 Inspired by an apocryphal story about Tennessee Williams near the end of his life, Daniel MacIvor's His Greatness (which doesn't name the characters in the actual dialogue but makes no secret of who they're based on) spends two days in late 1980 in a Vancouver hotel room with three gay men. The Playwright (Matthew Marsh) is in town for the opening of his latest play - actually just a rewrite of an earlier, critically panned work. Already feted as a Great American Playwright for his early plays, his most recent work has met with derision, which he responds to by burying himself in whiskey and cocaine. A former lover, now his long-term Assistant (Russell Bentley,) steers him through his schedule, his main job seeming to be keeping the Playwright sober for any public appearances. As tonight is opening night, his job also involves hiring a Young Man (Toby Wharton) to escort the Playwright to the theatre, as well as providing other services later in the evening.

MacIvor's play is a mixed bag - the writing's strongest in the barbs exchanged by Playwright and Assistant, their relationship so like a long-married couple except not only have they stopped having sex, but one has to now procure new sexual partners for the other. Their bitchy dialogue sets up the characters well, although in the more serious scenes the writing is variable. My least favourite moment was the clunky epilogue detailing the tragic ends the characters will come to. Perhaps MacIvor should have taken advice from one of his most astute observations earlier in the play: Most tragedies end with a lot of deaths, but the tragedy of Williams' characters may be that they have to go on living.

Ché Walker's production at the Finborough brings out the best in the play though, as do three excellent performances. Jean-Marc Puisant's traverse set brings us realistically into a luxurious but rather depressing hotel room, which the permanently hungover Playwright rarely allows to see natural light. When the rent-boy does finally strip down to his tighty-whities (don't look at me, the theatre released that publicity photo, not me, it's almost as if they know their audience; Wharton dresses to the left, if you were wondering) the Playwright starts to get ideas about making him his new muse, a step too far for the long-suffering Assistant, and combined with the inevitable bad reviews, the next morning sees things take a turn for the worse. Exploring themes around great writers and the pressure their own success puts them under inevitably invites unfair comparisons. If MacIvor himself isn't quite the Great Canadian Playwright this is still a solid, entertaining play with some totally absorbing performances, and worth catching.

His Greatness by Daniel MacIvor is booking until the 19th of May at the Finborough Theatre.