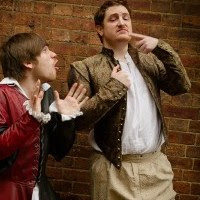 This week is brought to you by the letter L: After Love, Love, Love on Monday it's now the turn of Love's Labour's Lost. This is my final Globe to Globe trip, and the only one that really counts as Shakespeare in a foreign language, as I speak Greek, and the Othello was only translated into a different dialect of English. The language is British Sign Language, and the show's performed by Deafinitely Theatre, who will be following the Globe stint with a brief tour. I chose a BSL show as something I could take my sister to, as she did a course in it last year. What we didn't know when we booked was that her teacher, Nadia Nadarajah, would actually be playing the Princess of France, who along with her ladies-in-waiting arrives in the Court of Navarre. When the King and his friends fall for the ladies, it seriously challenges their recently-made oaths of celibacy.

As with all Globe to Globe shows this isn't surtitled, but general scene descriptions appear on the screens - on the tour there will apparently be voiceover narration for people who don't know BSL. Having seen the play recently enough to remember the story probably helped me as well. It took me a while to adjust, and I was very aware that I was only getting broad strokes of the comedy, but I soon settled into the idea of treating it like a silent movie - which, what with the captions and musical accompaniment, it does end up resembling. Penny was quite disappointed at how little she understood - she hadn't expected to get everything but thought she'd be able to pick out more than she actually managed to. (She did want it noted though that "Nadia was good.") Since my own sign language knowledge is extremely limited, and I didn't think "giraffe," "fisting" or "next to the tube station" were that likely to come up, I guess I had less room for disappointment.

The actors put a lot of energy into the show, and even without understanding the language there's physical humour that's universal. I did wonder, though, how well deaf audience members at the side of the stage would fare, as the signing seemed to be being directed exclusively straight out to the front. Overall, fun, but an odd Shakespeare to see in a silent language, since the story isn't one of his best, and the play's main strengths are considered to be in the wordplay.

Love's Labour's Lost by William Shakespeare in a translation by Kate Furby and Deafinitely Theatre continues on tour to Ipswich, Wolverhampton, Derby and Brighton. Globe to Globe continues until the 9th of June at Shakespeare's Globe, and recordings of the productions are gradually being added to thespace.org