Theatre review: The Thing About Men 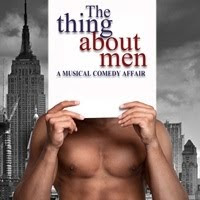 Based on a 1980s German film, Joe DiPietro (book & lyrics) and Jimmy Roberts' (music) musical The Thing About Men opens with a 15-year marriage on the rocks. Busy advertising executive Tom (Peter Gerald) has cheated on his wife before, but when he realises that Lucy (Kate Graham) is doing it as well, he moves out of their home. He then spies on her until he identifies her lover, wannabe bohemian artist Sebastian (John Addison.) This being a "musical comedy affair," the next obvious thing for Tom to do is to take on the alias of "Milo" and move in with Sebastian, who's on the lookout for a new flatmate. Initially trying to sabotage Sebastian's relationship with his wife, Tom finds himself making a new friend.

With this show only getting a short run and me tending to fill my theatre diary well in advance, the only performance I could make was this afternoon's matinee, which only had 7 other people in the audience (and which started an hour later than the 3pm I'd been sold by the website; apparently the error has now been corrected but it may be worth double-checking if you book a matinee.) But to the cast's credit, although I'm sure they were holding back, they didn't let it show, especially in their singing. I've learnt not to comment on how memorable a new (to me) musical's songs are as I invariably need more than a couple of listens to really judge that (as with the Matilda soundtrack, which I'm now addicted to having pronounced it not catchy at the time.) But the songs are in the main lively foot-tappers, usually ending on a big belter of a note - most of these go to Gerald. I enjoyed "Because" and the unfortunately-titled "Take Me Into You" among others.

The small cast is rounded out by Steven Webb and Lucyelle Cliffe as a chorus of sorts, taking on every other character the principals meet. The funniest of these is probably Webb's third-wheel waiter, determined to butt in to a love song; the worst by far is the unfortunate "Mickey Rooney in Breakfast at Tiffany's" moment from both actors, which only lasts about 3 seconds, and therefore lasts about 3 seconds too long.

As often seems to be the case at the Landor, there's an inventive set (by Martin Thomas) that hides props in a creative way in the small space, although I could swear I've seen a similar "New York skyline" design at the same venue in other shows. The show's premise, in which Sebastian happily lets Tom into his home despite every indication of his being a deranged stalker, stretches credibility a bit too far, but I guess worse plotting crimes have been committed over the years in the name of musical theatre. And with the best will in the world Addison and Graham can't pass as being the same age. But overall this is an entertaining show with an unexpectedly Avenue Q-style not-quite-happy ending, in a solid production from Andrew Keates.

In my experience, casts at under-attended performances often direct their resentment at the people who showed up instead of those who didn't; instead, The Thing About Men's quintet did their best to replicate the effect of a busier performance, and the show does deserve fuller houses for the rest of its run.

The Thing About Men by Joe DiPietro and Jimmy Roberts, based on a screenplay by Doris Dörrie, is booking until the 9th of June at the Landor Theatre.