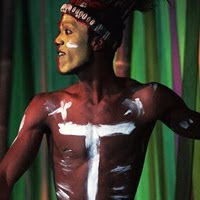 New York-based playwright James Sheldon's Shiverman takes place on a fictional Pacific island, but takes its themes from real cases and customs of small islands near Papua New Guinea. Possibly-American (Paul Mooney's accent does wander a bit too much to be certain) anthropologist Roy has been studying the indigenous tribes for three years, assisted by local boy Tatalau'e (Benjamin Cawley) who's been dazzled by dreams of studying in California. When a Chinese strip-mining company looks set to raze the valley to the ground, Roy calls in Dominique (Lisa Kay,) his girlfriend and colleague, to help his appeal to UNESCO to protect the local culture, under the laws of "intangible cultural heritage." But under these regulations, a culture's human rights can only be protected if they don't violate already-established rights, and Dominique discovers what Roy's been hiding from her: Before being allowed to marry, all local girls must be raped by the tribe of "holy men."

Shiverman deals with a fascinating human rights issue where there seems to be no middle ground: Either the abuse of women can go unreported to the UN, and allowed to continue; or it can be stopped, the heritage application fail, and potentially one of the oldest surviving human cultures be wiped off the map and out of history. In places, Sheldon has also managed to weave an appropriately interesting story out of the dilemma. A bit too often though, especially in the scenes between Roy and Dominique, he falls into the familiar trap of putting an extended argument on stage, in which two people laboriously go over the points the play's trying to make. Tom Littler's production doesn't manage to overcome this problem and in parts is very slow-moving. As an aside, the seating in Theatre503 is particularly uncomfortable, even by fringe standards (I know I don't visit 503 that often but I really don't recall the seats being this bad - the seat backs actually lean forward, squeezing you in) which does have the effect of making you especially impatient when things slow down.

The best scenes are undoubtedly those between Cawley's impressionable Tatalau'e, and Eleanor Wyld as Terri, a suspiciously wealthy Australian graduate student helping the anthropologists. Her ruthless determination to see the forbidden burial ground brings about the dramatic crux of the play, and tests how far the temptations of modern life can make Tatalau'e betray his ancestral beliefs. A play with some strong performances and interesting ideas that's worth a look, but is prone to meandering.

Shiverman by James Sheldon is booking until the 26th of May at Theatre503.