PREVIEW DISCLAIMER: Technically this doesn't open to London reviewers until next week. It's been on tour since August though, so hopefully they know what they're doing by now. 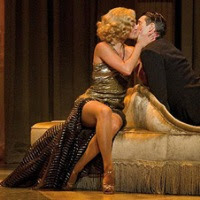 I should probably also add a disclaimer that this borders on a "not-review" because I've got a cold, and spent this show blowing my nose and feeling like death warmed up. Still, my £16 "restricted view" seat in the very back row of the Grand Circle proved good value with in fact an excellent, if distant, view of the stage - although the three rows ahead of me were empty, so perhaps in normal circumstances people's heads block the view.

A variation on the jukebox musical, there's a trend at the moment for adaptations of musicals by well-known composers - in this case Irving Berlin - with the soundtrack padded out with some of their well-known tunes from other sources. Top Hat was originally an RKO Fred-and-Ginger movie (and the programme notes have a lot of info on the studio's history, focusing especially on staff changes and brushes with bankruptcy, because everyone knows the most glamorous thing about Hollywood is the accounts.)

Jerry Travers (Tom Chambers,) is a Broadway star doing a few shows in London for his producer friend Horace (Martin Ball.) While there, and subsequently in Venice, he meets and falls for Dale Tremont (Summer Strallen,) a friend of Horace's wife. The plot hinges on a lot of mistaken identity and an Italian clothing designer (Ricardo Afonso) who's also got his eye on Dale. I'll readily admit this isn't really my sort of thing and I only booked because I like Summer Strallen - predictably, then, it was her three solo songs I liked best, especially "Wild About You." Chambers I found a rather charmless leading man, with a very nasal singing voice. The song-and-dance numbers are pretty strong, but I was far from convinced by the bits in between, which are sometimes way too long: Director Matthew White and Howard Jacques' adaptation of Dwight Taylor and Allan Scott's screenplay didn't get many laughs from me, and relies occasionally on LOLgay and LOLforeigner stereotypes for its comedy. The second act is improved by the appearance of Vivien Parry as Horace's wife Madge, with a nice line in well-timed barbs. The rest of tonight's audience seemed to be loving the whole show though, and at times it dragged even me out of my sniffly grump for a while.

Top Hat by Irving Berlin, Dwight Taylor & Allan Scott, and Matthew White & Howard Jacques is booking until the 26th of January at the Aldwych Theatre.