PREVIEW DISCLAIMER: The performance reviewed is from a little over halfway through the preview period. 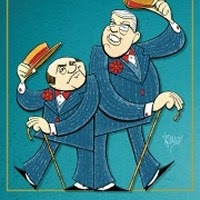 Having worked together a few years ago on Equus, Richard Griffiths and director Thea Sharrock reunite in the West End for Neil Simon's The Sunshine Boys. For the other half of the titular double act, Danny DeVito plays Willie Clark, and physically at least you can see the two of them as an old-school vaudeville comedy act, so comically mismatched are they in size - it occurred to me at times that you could almost fit an entire DeVito in Griffiths' belly. The elderly Willie lives alone in a small New York apartment, his only regular human contact being weekly visits from his nephew, and terrible agent, Ben (Adam Levy.) When a TV network plans a retrospective on vaudeville, Willie is invited to reunite with his old partner Al Lewis (Griffiths.) The trouble is the two can't stand each other, and haven't spoken in 11 years.

There's a lot of snappy lines in Simon's script but they're not delivered quite snappily enough here. Individually the two leads are good enough, and it's not that they have bad chemistry, but it's certainly not great either. As I say, the show is still in previews, but it has been for over a week now and I'm not sure another week of them will create a spark that's not quite there. The first act is gently amusing but a bit disappointing, the second does pick up a bit, helped in part by Johnnie Fiori's appearance as a sassy nurse who gets lumbered looking after one of the men. It's probably not a great sign that the funniest, liveliest scene is the recreation of one of the pair's creaky old music hall sketches (and even that, Jan said afterwards, could have been faster: Even bearing in mind they're supposed to be grumpy old men who haven't performed the routine in a decade, the entire style of vaudeville comedy is still meant to zip out the gags at much greater speed than we see here.)

Judging by audience reaction tonight, the presence of Griffiths and especially DeVito pretty much guarantees people are going to enjoy this show (though we did have a really odd audience.) For me though, I thought Sharrock's production showed the two men's weariness but not enough of the spark that still keeps them going, and at each other's throats. So while it has its moments, The Sunshine Boys isn't quite the theatrical event we might have hoped for.

The Sunshine Boys by Neil Simon is booking until the 28th of July at the Savoy Theatre.