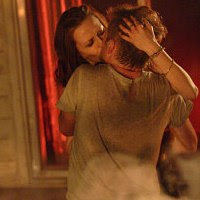 Set in an unnamed "mid-sized" US city (although you'd have thought the play's title was a clue as to location) Lisa D'Amour's Detroit is a black comedy of American suburbia, and the latest play to come to the National from Chicago’s Steppenwolf company. Although this time only director Austin Pendleton and set designer Kevin Depinet have come with it, a new British cast replacing the original American one. Ben (Stuart McQuarrie) and Mary (Justine Mitchell,) in an attempt to reverse the trend of neighbours not knowing each other, invite the couple who've just moved next door round for a barbecue. Even when Kenny (Will Adamsdale) and Sharon (Clare Dunne) turn out to be recovering junkies whose life stories have a worrying number of holes in them, they continue to develop the friendship. But as well as having a sometimes damaging effect on each other, the two couples will also find a surprising amount of common ground.

Detroit is essentially the story about being careful who you invite into your home and into your life, packaged in a witty script and with excellent performances that made it, for me at least, a very entertaining evening that seemed to go by quicker than its nearly two-hour running time. Staged in traverse, Depinet's simple set hides a few surprises as the play turns into chaos. Adamsdale and Dunne are likeable as the jittery couple barely managing to stay out of the abyss, Mitchell and McQuarrie equally good as the seemingly content couple who'd really just like to jump right into it. There isn't really a great deal below the surface of the play itself - a final scene which attempts to solidify a message about the nostalgia for a sitcom neighbourhood that never was versus the reality, ends up just feeling odd and misjudged. But if it's less profound than I suspect it may think it is, Detroit is at least an entertaining ride.

Detroit by Lisa D'Amour is booking in repertory until the 14th of July at the National Theatre's Cottesloe.