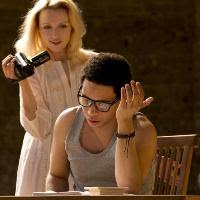 When I'm stuck on how to start a review, a brief overview of the play is the usual standby, but that's not very useful when I have no idea what the play in question is meant to be. Fortunately, during the third act of Matthew Dunster's Children's Children, when the characters all started shouting at each other in a kitchen after a funeral, I figured it out: It's a soap opera. Michael (EnsembleTM alumnus Darrell D'Silva) is a cheesy TV presenter with a hit Saturday night game show. He's known best friend Gordon (Trevor Fox) and Gordon's wife Sally (Sally Rogers) since drama school, but the latter pair have never had much success as actors. Now in middle age, Gordon's situation has got so bad that he has to beg his wealthy friend for money. By the second act, Gordon and Sally have pretty much moved into Michael's summer house in Dorset, not telling him that their daughter Effie (Emily Berrington,) her husband Castro (John MacMillan) and their new baby are also living there. But this time it's Michael who'll be in dire straits and needing his friends' support.

Although at times entertaining enough I found Children's Children baffling, the story and its themes jumping around so much it's hard to figure out what on earth it's trying to say. There's obviously a core theme of friendship and trust, but also elements of celebrity and entitlement, and at one point I thought it was solidifying into a look at couples where one partner is much more successful than the other. But then halfway through the final act, aspiring documentary maker Castro launches into a 12-minute (Christopher timed it) lecture on the evils of oil companies, and the damage they do to people and the environment. He ends it by saying that you can't normally get people to listen to this information because they find it boring and unpalatable, which is frankly like adding insult to injury. Given that this speech is where the play gets its title from, I can't help thinking maybe this is what it's all meant to be about, and Dunster has tricked a load of people into a room to hear about a topic he feels strongly about, with a story cobbled around it. Which, given the amount of compelling theatre I've seen that deals with serious and even harrowing issues, begs the question of why he didn't just write a play about the subject he cares about?

On Robert Innes Hopkins' clever but cumbersome set, the usually reliable Jeremy Herrin directs a bit of a bloodless production whose cast's abilities vary wildly: Rogers' dead-eyed, lifeless performance drags down the rest of the cast in any scene she's in, and, well into the show's run, she has at best a passing acquaintance with what her lines are and in what order she's meant to speak them. MacMillan is pretty good until required to give Castro's endless sermon that's surely beyond any actor's ability to rescue, and Berrington is amusing as the famous-for-being-famous Effie but the character's so unlikeable you just want her off the stage. And be warned, in what's proving to be quite a nudey year, she also has a
SEVERE VADGE WARNING
Beth Cordingly comes out of this the best out of all the cast, as Michael's second wife Louisa, in many ways the outsider to the drama but often the one best able to solve the crisis. But really this did feel like a truncated soap opera, with occasional histrionics, and stories and themes coming and going over the course of the evening, before tailing off with plenty unresolved and forgotten by the end (what was it that was kept from Sally during her honeymoon? And what the hell happened to the rest of the money?)

Children's Children by Matthew Dunster is booking until the 30th of June at the Almeida Theatre.