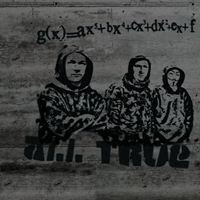 The latest round of Artistic Director Musical Chairs is played at the Gate, where Christopher Haydon's inaugural season comes under the umbrella title "RESIST!" Evariste Galois, a 19th Century French mathematician and radical, died, possibly in a duel, at the age of 20 before getting the chance to fully explore his theories. Having struggled to find a way to tell his story on stage, Lorne Campbell (also directing) and Sandy Grierson finally hit on the unlikely technique of pairing Galois (Jon Foster) with controversial WikiLeaks founder Julian Assange (Lucy Ellinson,) who quizzes the mathematician on the very specific definition of "the truth" that both men are obsessed with, in Tenet: A True Story About the Revolutionary Politics of Telling the Truth About Truth as Edited by Someone Who is Not Julian Assange in Any Literal Sense.

Greyscale's production uses (gentle) audience participation to stage key moments in Evariste's life and career, in a playful show powered by tea and biscuits (served by Ellinson to the audience as they enter.) Scale models within scale models of Garance Marneur's red, white and black set are used to bring his way of looking at equations to life, and as with any show about maths I'd be lying if I said I understood the meaning behind the metaphor (at least I understood the metaphor.) But Tenet at least acknowledges that the actual mathematics is likely to make sense to only a small proportion of the audience, and pitches itself accordingly.

With its short run time, the play doesn't really delve into the mathematician's politics or those of Assange, on whom the tables are turned at one point. Tenet hasn't left me able to tell you much about Evariste Galois, his beliefs or his place in the history of mathematics, but I feel as if it's told me something about the spirit of the man, and done so entertainingly and enthusiastically.

Tenet: A True Story About the Revolutionary Politics of Telling the Truth About Truth as Edited by Someone Who is Not Julian Assange in Any Literal Sense by Lorne Campbell and Sandy Grierson is booking until the 26th of May at the Gate Theatre.