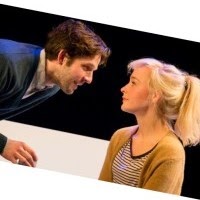 For Nicholas Hytner's final directing job as Artistic Director of the National, he gets one of the biggest-name writers alive to return to the stage after nine years' absence: Tom Stoppard returns to the ways academic theory interacts with people's real emotional landscapes, this time investigating the difference between the brain and the mind. We follow psychologist Hilary (Olivia Vinall) over a few years during which she keeps being troubled by the question of, if the brain is simply a collection of matter, what is consciousness, and how do we determine what has it? We first meet her as a student, and her tutor and on-off lover Spike (Big Favourite Round These Parts Damien Molony) has no doubt that the sense of self is one of many quirks of evolution, and is impatient at Hilary's more spiritual angle, that even takes in prayer. But when she gets a job with Leo (Jonathan Coy,) he encourages her interest in what is termed The Hard Problem.

But this is also Stoppard's Financial Crisis play: Hilary and Leo work for a research institute financed by Jerry (Anthony Calf,) a hedge fund billionaire who hires people like Amal (Parth Thakerar) to build computer programmes predicting the market's behaviour. 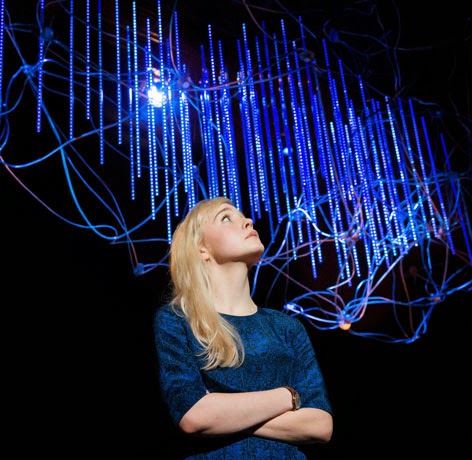 After the reconfigured auditorium for Here Lies Love, this is the first production to showcase the new Dorfman in its default, end-on configuration. One definite loss is the much-loved, bargainous Row T of the Cottesloe, which has been sacrificed to more up-to-date tech booths. Now the only budget-friendly seats are a side view from the top tiers, from which at least a quarter if not a third of the stage is obscured. 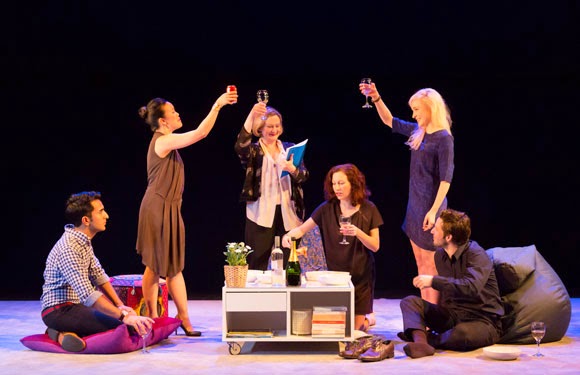 Bob Crowley's set is dominated by a tangle of lights hanging above the stage, which spark like synapses in the brain. The stage itself is very simply designed, furniture brought on and off a plain carpet during blackouts; it's not really ideal for a play with so many scene changes, as the frequent stopping for the stagehands to reset the scene doesn't help the play's flow. Not that it would flow that well anyway: In terms of the individual scenes, and the philosophical and psychological arguments they deal with, it's for the most part interesting to watch, but there's a frustrating lack of cohesion. The personal keeps mirroring the theoretical: There are discussions of coincidence from a mathematical point of view; meanwhile Hilary often thinks of the daughter she gave up for adoption, not realising she's actually met her. Altruism and egotism are frequently brought up; the motivations for everything Hilary's protégée Bo (Vera Chok) does, from making her a cup of coffee to doctoring research results, become a plot point late on. The idea of whether a man-made system can behave as unpredictably as a human consciousness is posited; the stock markets financing the whole research soon behave just as chaotically. 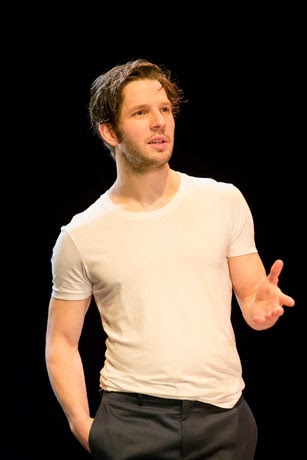 These connections never quite tie up into anything that feels dramatically satisfying, though, nor does the play take a side on the central issue. In a more familiar Stoppardian problem, there's a coldness to the characters, who are bit too obviously built around their views. Vanessa found the central pair uncharismatic, and having seen both Vinall and Molony effortlessly charm an audience in the past, I have to lay that on how they're written. At least the production inadvertently answers one of its own philosophical questions: Damien Molony spends a couple of scenes wandering around in his boxers, undoubtedly causing a couple of hard problems of his own in the process. Not a single publicity photo has chosen to document this, which can only prove that we live in a godless universe. I wonder if there's anything that could help ease the pain of this miscarriage of justice.

Also, anyone who follows Molony on Twitter will surely get a chuckle out of his character's grumbles about bad coffee.

Also also: Psychologists refer to this particular hard problem as The Hard Problem? I'm going to take a wild guess that they're not generally known for their creative imaginations.

The Hard Problem by Tom Stoppard is booking in repertory until the 27th of May at the National Theatre's Dorfman.