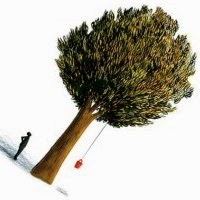 Although I've not been following Daniel Kitson's work for as long, or seen as many of his shows as a lot of people I know, those of his eccentric monologues I've seen - most recently Analog.Ue - have made me want to catch as much as I can. His latest piece - though originally staged in Manchester a couple of years ago - is a bit of a change of style. Tree is a two-man play, in which Tim Key plays a lawyer who, having not realised the clocks have gone back, arrives at a date an hour early. He's setting up a picnic in an unlikely spot his date suggested, by a large lone tree on a residential street. What makes the location even odder is that there's a man (Kitson) sitting in the branches; he claims to have been living there for the last nine years, in an attempt to stop it joining all the other trees in the street and being chopped down.

The titular centrepiece of the set is a highly realistic, solidly built tree into whose branches Kitson is harnessed throughout the play, but from the start Tree reveals that the storytelling won't always be as literal as that, Kitson and Key marking out the road and tree stumps in white tape on the stage, even as the last audience stragglers are still arriving. What follows is an only mildly surreal hour and a half as the two men tell their stories - Kitson how he ended up in a tree and how he manages his life there, Key having quite an unlikely tale of his own to tell, of reconnecting with a woman he'd met just once before, a decade earlier.

Tree doesn't quite have the magical quality of some of Kitson's storytelling shows, but it's far from short of charm of its own. Although not alone with the audience this time, Kitson's relationship to them is once again eccentric - where Analog.Ue saw him permanently visible onstage but never actually speaking live, in Tree he has a lot to say but is only to be seen in occasional glimpses through branches. Compared to the usual programming it seems an odd match to the Old Vic, but in terms of the space it's a perfect one, its huge centrepiece plonked into the current in-the-round setting and adding to the quietly odd feel of the play. With its two stand-up comedians telling tall tales with banal settings like buses and neighbourhood disputes, this is a very funny play with a lot of inventive lines; but in its final moments Tree also supplies a number of twists that throw a new light on the everything that's gone before. Not Kitson's best work but an interesting change of direction.

Tree by Daniel Kitson is booking until the 31st of January at the Old Vic.