Theatre review: Women on the Verge of a Nervous Breakdown 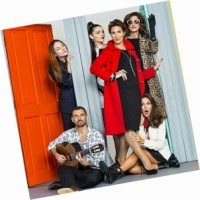 When I first saw Pedro Almodóvar’s film Women on the Verge of a Nervous Breakdown I remember being struck by how overtly theatrical it looked, and how well it would work if put on the stage. But Almodóvar is reluctant to license stage adaptations of his work, and as the film finally comes to the theatre it's in the form of an off-Broadway musical with book by Jeffrey Lane and songs by David Yazbek. Pepa (Tamsin Greig) is an actress most of whose work is in TV commercials, and in dubbing foreign film into Spanish, usually opposite her boyfriend Iván (Jérôme Pradon.) One morning she wakes up to find Iván has dumped her via answerphone message, and suddenly there's a lot she didn't know about him, like the estranged wife Lucia (Haydn Gwynne) who's been in a mental hospital for the last 19 years, and doesn't come across as massively sane even now she's been released.

The plot is a farcical haze in which Lucia, her son Carlos (Haydn Oakley,) his bridezilla fiancée Marisa (Seline Hizli,) and Pepa's best friend Candela (Anna Skellern,) who's just realised she's been shagging a terrorist for the last week, all descend on Pepa's apartment. And there's gazpacho with a load of Valium in it. 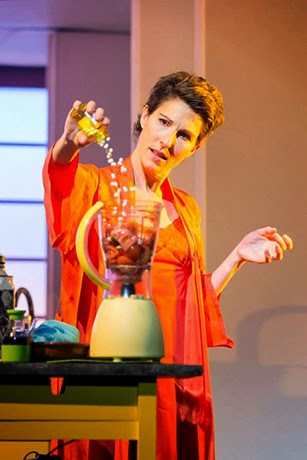 Greig is new to musicals - although I can't think of anyone better to open a show by walking onstage and looking surprised to see a band there. She can hold a tune and belt out a big emotional moment, although not necessarily both at the same time. I was surprised how many of the songs she has to carry though, especially given there's plenty of musical theatre veterans elsewhere in the cast. Willemijn Verkaik is an ex-Elphaba (an Exphaba?) So presumably she can honk out a big showstopper in her sleep, but as lawyer Paulina she only has about half a dozen sung lines. Michael Matus is wandering around somewhere in the background with little to do as well. 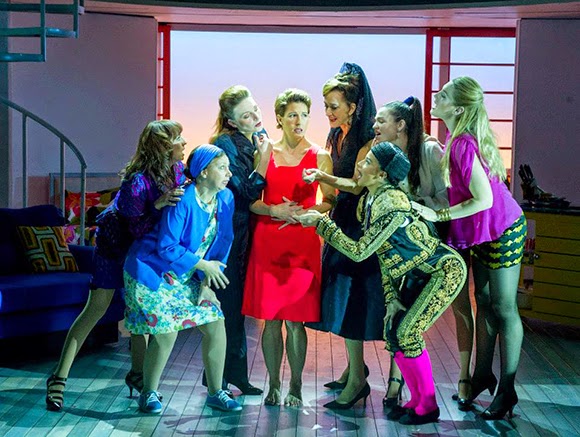 With the craziness of the black comedy that inspired it, you'd expect turning it into a musical would be a natural fit, but I'm not sure Lane and Yazbek watched the same film - they certainly weren't writing the same show. The plot is too silly and frantic to linger over too long, but constantly stopping for a song does precisely that. And Yazbek's songs are almost all slow to mid-tempo, unmemorable, sad meditations on heartbreak that do nothing other than kill the momentum which the story then has little chance of picking up again. Almodóvar’s film seamlessly mixes farce with melodrama; it seems as if the stage adaptation has put all the farce in the script, and all the melodrama in the songs. The show's like one of those cars made of two halves of different stolen ones, welded together. Except these two cars aren't even the same model. 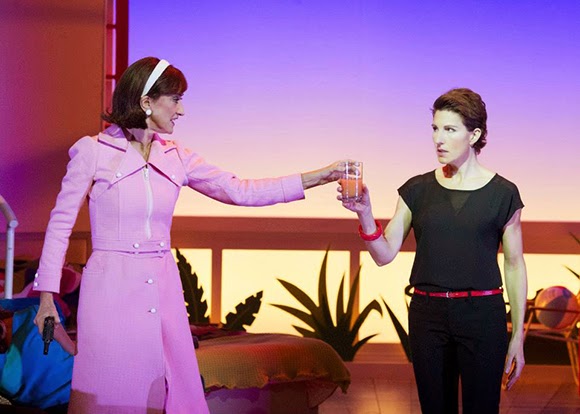 Bartlett Sher's production is nominally set in Madrid in 1987 like the film, but there's little suggestion of either '80s excess or Spanish passion on show. I genuinely couldn't tell if the creatives were trying to recreate the film's tone and failed, or were using it as a starting point to try something different. Either way, as someone who liked the film this was a disappointment; Greig, Gwynne, Hizli and Skellern are talented enough comic actresses to salvage it a bit but it's not really enough.

Women on the Verge of a Nervous Breakdown by Jeffrey Lane and David Yazbek, based on the film by Pedro Almodóvar, is booking until the 9th of April at the Playhouse Theatre.