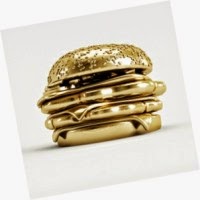 In my end-of-year reviews I usually have a look at some of the recurring themes that have kept turning up on stage in those months. Most are unexpected but as I go into my first show of 2015 I already know what one of them is going to be: It's generally a Shakespeare play that theatres avoid nowadays but at the moment there's three separate productions of The Merchant of Venice that I'm planning to see in the next six months. First up is a production I first saw in Stratford-upon-Avon in 2011, Rupert Goold's high-profile relocation of the action to modern-day Las Vegas. Venice is now a '60s-themed casino where the merchant Antonio (Scott Handy) takes out a $3 million loan on behalf of his friend Bassanio (Tom Weston-Jones,) who needs it to seek out a wealthy heiress on a reality TV show.

Antonio borrows the money from Shylock (Ian McDiarmid,) who inserts a seemingly ludicrous clause that he can cut out a pound of the merchant's flesh if he forfeits on repayment. But Antonio has never concealed his hatred of the Jewish moneylender, and when his investments leave him unable to pay, he finds Shylock has bloody revenge in mind. 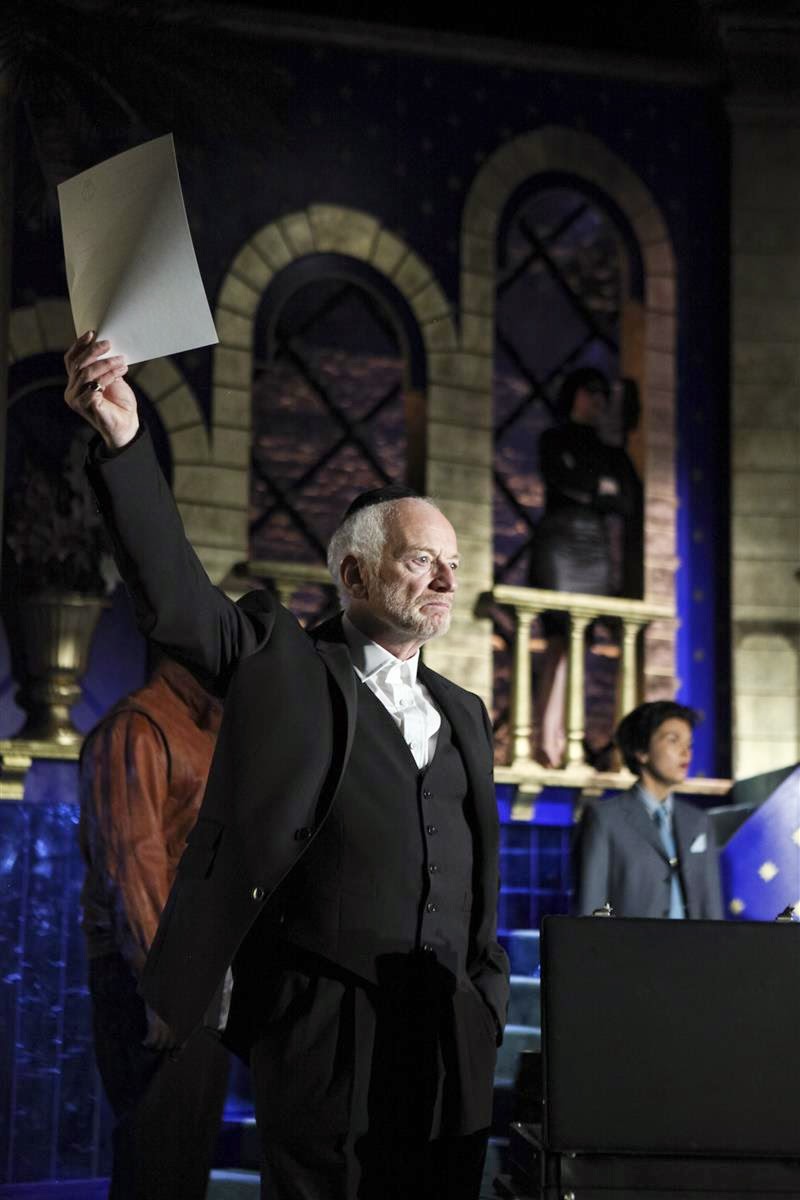 It's sometimes said that it's impossible to set The Merchant of Venice post-Holocaust because of the characters' overt antisemitism, but Goold's production comes as close as I can imagine possible to proving that wrong. It's in part the fact that a kind of oppressive Christianity that pervades US politics also hangs over this production. Literally: Among Tom Scutt's excellent designs, mention has to go to the casino logo overlooking the set, which when lit up is a showgirl but in shadow looks like a crucifix. The other reason is that Goold uses the play's religious intolerance as a metaphor for the racism making headlines in America to this day - Anthony Welsh's Gratiano using his phone to film himself spitting on Shylock is a potent and current image. 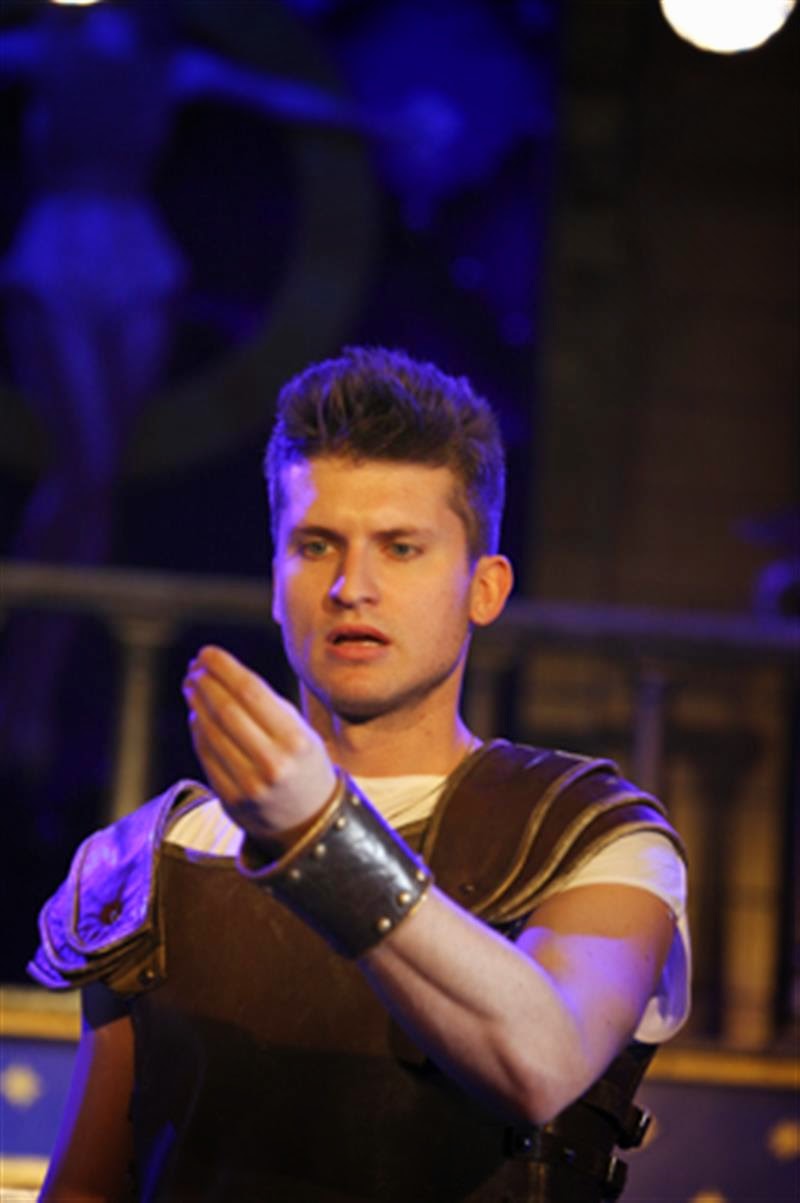 We may no longer accept The Merchant of Venice as a straightforward comedy, but that doesn't mean the comic elements aren't still there, the Vegas setting not only providing the opportunity for spectacle but also a lot of dressing up - making for a funny sequence as Shylock's daughter Jessica (Caroline Martin) runs away with Lorenzo (Finlay Robertson,) as well as forcing Weston-Jones' Bassanio to do his unconventional wooing of Portia dressed as a gladiator. Technically it doesn't make much sense for Shylock's former servant Lancelot Gobbo (Jamie Beamish) to be an Elvis impersonator, but it does give the opportunity for an overall musical theme to the production, Elvis songs used to sometimes energising, sometimes chilling effect. 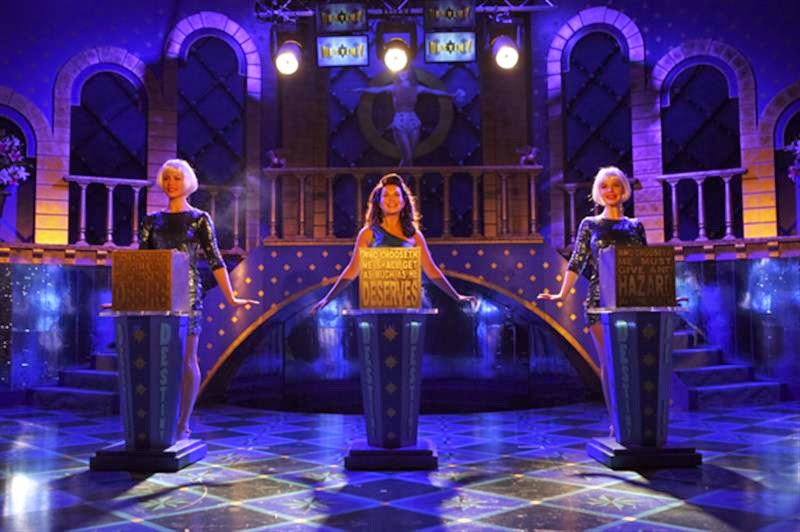 A large amount of the 2011 cast have come back for the London run, and nowhere is this a bigger blessing than in the return of Susannah Fielding, whose Legally Blonde-styled Portia dominates the show. Emily Plumtree's Nerissa has become the host of Portia's reality TV show, part The Bachelorette, part Deal or No Deal. Always very funny, Fielding also makes Portia especially vicious - bitchy, casually racist and deeply patronising to Jessica. What seems more clearly defined now is the idea that she's constantly faking: There's plenty of hints that her dumb Southern blonde is just an act for the cameras, and in the trial scene - here played as a very effective thriller - she's pretending to be a male lawyer called Balthazar. 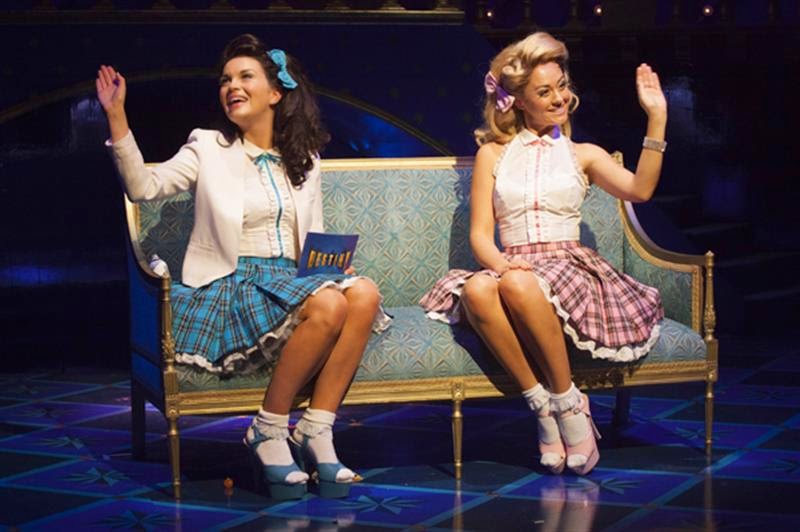 One of the big problems with The Merchant of Venice is a structural one, as the final act introduces a lot of running around with wedding rings, that's hard to care about after the climactic scene of Shylock's downfall - made painful in McDiarmid's performance of him as a tired man at the end of a lifetime of abuse. Goold's inventiveness can't quite cover up the parts that don't work, but it does interestingly refocus Act V as the unraveling of Portia's alter-egos, leaving her exposed. Fielding once again nails this breakdown, confirming this, despite other good performances, as being very much her play. The Merchant of Venice is a hard play to love, but the upcoming productions this year will be hard pushed to match this one, which ramps up the entertainment value before ruthlessly pulling the rug out from under the audience.

The Merchant of Venice by William Shakespeare is booking until the 14th of February at the Almeida Theatre.