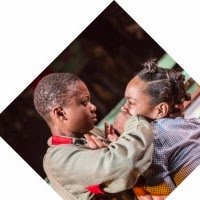 Martha (Juma Sharkah) is the titular 14-year-old Liberian Girl in Diana Nneka Atuona's debut play, but this isn't a fact most of the characters in the story are privy to: When her grandmother Mamie Esther (Cecilia Noble) realises a rebel army is approaching their village, she cuts Martha's hair off and makes her pretend to be a boy. As she'll soon find out, life for a girl in a war-torn state is brutal, but her new male identity won't make things easy for her either: As they try to flee to safety, Esther and Martha are accosted by child soldiers Killer (Valentine Olukoga) and Double Trouble (Michael Ajao.) Separated from her grandmother, Martha's disguise means she escapes being raped, but Frisky, as she's now nicknamed, is forced to fight on the side of Charles Taylor's rebels, in a civil war she barely understands.

Atuona's play is by necessity a brutal one, all of whose vicious young killers are quickly revealed to be just as much victims as Martha is; the choice to put a girl in the central role though allows the writer to also take in other harsh realities of life for African women and girls. 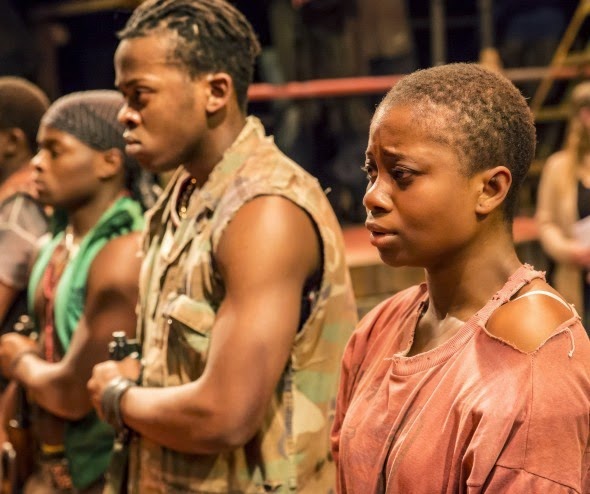 What makes Liberian Girl that extra bit more painful to watch is Matthew Dunster's decision to stage it in promenade. Anna Fleischle's set inventively fills the Royal Court Upstairs with two metal balconies overlooking the action*, but most of the audience stands in the thick of it, being commanded to move at gunpoint any time they get in the way. 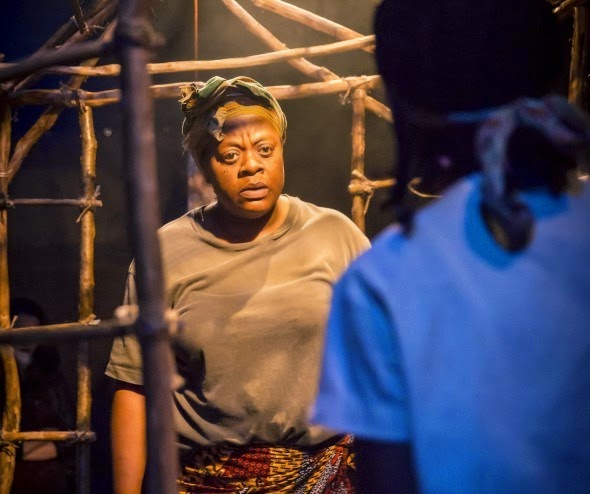 Never quite allowing herself to enjoy the violence in the way that those around her seem to, Martha does regardless feel increasingly corrupted. Sharkah gives an impressive performance as the weight of her actions, and the unexpected responsibility of taking care of a captured girl (Weruche Opia) bear down on her; but in some ways her strongest scenes are when Killer and Double Trouble are at their most violent, and she's standing back quietly taking in the world she's now in the middle of. 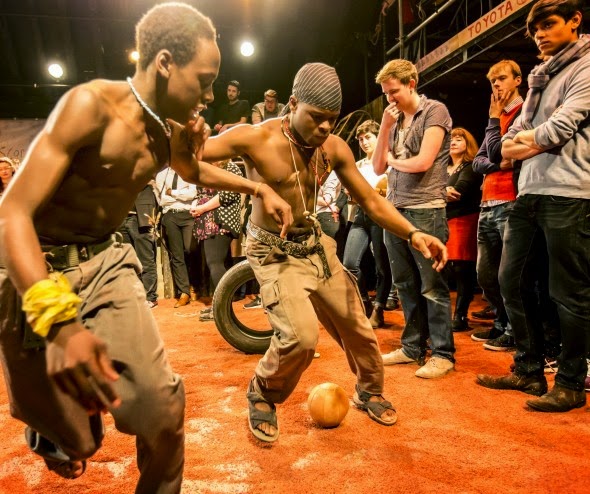 The uncomfortable staging is quite unforgiving on the fact that the play is a bit longer than it needs to be, but there's no denying it's also uncomfortable viewing in the good way. Arguably its most powerful moments aren't in the violent and disturbing scenes but in those - like when the gun-toting soldiers cower before their Commander (Fraser James,) or get lost in the fun of playing football - when we're reminded most strongly that they're still children.

Liberian Girl by Diana Nneka Atuona is booking until the 31st of January at the Royal Court's Jerwood Theatre Upstairs; then continuing on tour to Peckham and Tottenham.

*on the way in an usher asks if you'd prefer to be close to the action or further back; if you need a seat, the sections further back are your best chance of getting one
Posted by nick730 at 22:36