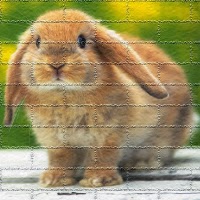 OK, so I've sometimes been guilty of getting the giggles when a show's attempt to be dramatic goes badly wrong. But 30 seconds into a performance is a record that's surely going to be hard to beat. Yet that's how long it takes for the stage to go dark except for a frame of blue neon lighting, and for Mark Bazeley to walk out of a crowd of extras (more on them later,) stride downstage and announce to the audience that sometimes you take the wrong road in life and it leads you STRAIGHT TO HELL! Bazeley is playing Dan, the anti-hero of Fatal Attraction, which James Dearden has adapted from his own screenplay, and Trevor Nunn has put on stage in the form of a fevered crack dream. Natascha McElhone plays Alex, the original bunny-boiler, and Kristin Davis plays Beth, the wife with the personality of a wet tissue.

If you're somehow unfamiliar with the 1987 film, the plot sees Dan stray when his wife and daughter are away for the weekend, sleeping with the seemingly normal Alex. But soon she's attempting suicide at the thought of his going back to his family, and when he does she stalks and threatens him. I don't know what I can say about Fatal Attraction beyond listing its jaw-droppingly misconceived moments. The setting has clearly been moved to the present day with everyone constantly on mobile phones, and Alex doing some of her stalking by email, but Robert Jones' design has an '80s aesthetic regardless, the blue neon surrounding the proscenium arch complemented by a blue neon pillar that trundles onstage to provide a "split-screen" effect every time there's a phone call - to increasingly audible groans with every appearance. Other audience reactions included the roars of laughter that greeted every sex scene, or the fight scene that largely seemed to involve tripping over chairs. 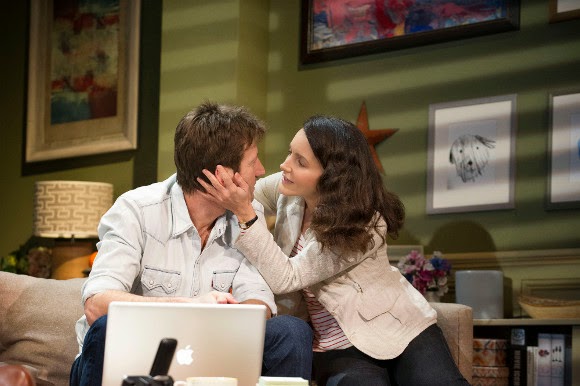 The club scene definitely deserves a mention; apparently mid-shag, Dan and Alex stop off at a trendy nightspot where the youth of today, or about seven of them at least, dance VERY ENTHUSIASTICALLY in a tight, choreographed cluster. The extras provide many a highlight - whether they're pointing and winking at each other at the bar, or jogging across the stage in the middle of a scene. Sure, the intended effect might be "there's eyes and ears everywhere," but the effect actually achieved is "oh look, someone just wandered across the stage." When the supporting cast actually get a line, it's a treat to see them perform the most banal lines as if they're Ophelia's mad scene - "IT'S ALL RIGHT DARLING! DADDY'S JUST SAD BECAUSE MOMMY'S IN THE HOSPITAL!" That one got a big laugh. 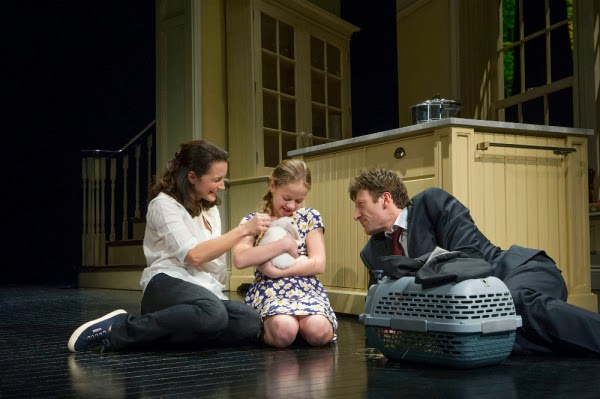 Mommy herself could be played by a pot plant, and arguably is. Stewart's convalescence after hospital sees her in black outfit and sunglasses, scowling motionless in a wheelchair like Jackie Stallone with the batteries taken out. The most famous scene in the film is telegraphed constantly, the fact that Dan and Beth's daughter wants a rabbit mentioned every couple of minutes; but the actual bunny-boiling is done so ham-fistedly (with the actual live rabbit still in its cage downstage when it's supposed to be in a pot) that anyone who didn't know the film would probably be lost as to what happened. Equally unsubtle is the idea that Alex identifies with Madame Butterfly - Dearden may as well grab the audience by the shoulders and shake them while screaming "SHE'S LIKE MADAME BUTTERFLY, SEE? SEE?" so many times does the opera play over the soundtrack or get alluded to, let alone the ludicrous final tableau. And I think this idea that the play should be treated like opera is where Nunn's production went so wrong in the first place, a campy performance style that exposes every single weakness in the script and creates a few of its own to keep them company.

Fatal Attraction by James Dearden is booking until the 21st of June at the Theatre Royal Haymarket.