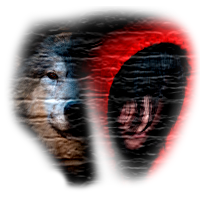 An adaptation of an adaptation at Shoreditch Town Hall: Philip Pullman recently published his own retelling of the classic fairytales by the Brothers Grimm, Grimm Tales for Young and Old, and it's these versions of the stories that Philip Wilson has adapted for an immersive theatre version in the old building's basements. As seems to now be the law, the audience is colour-coded into groups - only two this time, red and black, as there's just two teams of four actors each to tell the stories. Five of the Grimms' tales have been chosen, two of them among the most famous fairytales in the world, one ("The Juniper Tree") that I was slightly familiar with, and two that as far as I can remember I hadn't heard before. The black group started with the familiar "Rapunzel," told by the team of Ashley Alymann, Sabina Arthur, James Byng and Lyndsay Dukes.

"Rapunzel" comes complete with the prince's eyes being scratched out by thorns, and the grisliness continues as we're passed to the other storytelling team of Rebecca Bainbridge, Annabel Betts, Paul Clerkin and Simon Wegrzyn for "The Three Snake Leaves," a story where burial alive is just the starting point; then a "Little Red Riding Hood" with a bloodstained bed that some of the kids at this afternoon's performance were thrilled to get a better look at. 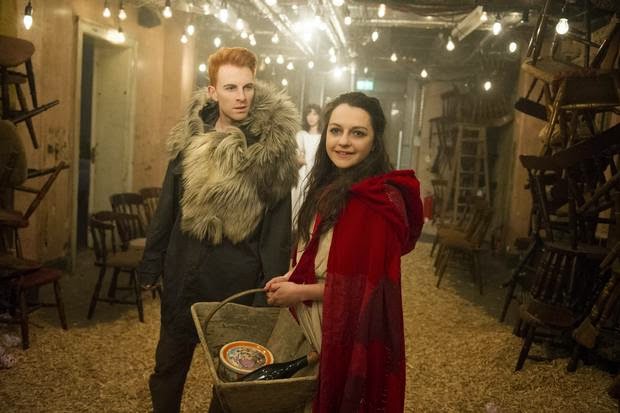 Then we get "The Juniper Tree" (I could have done with fewer repetitions of the bird's song - it's supposed to drive the wicked stepmother crazy, not the audience) and finally "Hans-My-Hedgehog," the quirkiest of the stories about a half-man half-hedgehog who rides a rooster and plays the bagpipes. We're told he plays beautiful music on them, which is how you know it's fiction. 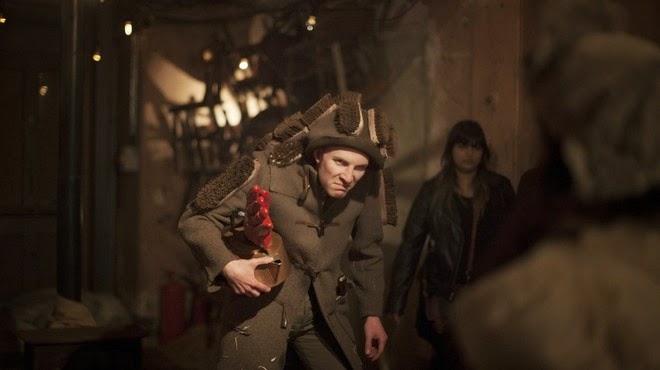 I did some storytelling theatre in schools as part of my drama degree so I still sometimes like to see how others do it, and these eight actors have the balance just right between acting as narrators and taking on the characters, and between relishing the bloodcurdling moments and retaining enough cheekiness not to scare the children. Certainly the young audience seemed enthralled, with barely a peep out of them except in response to the stories. 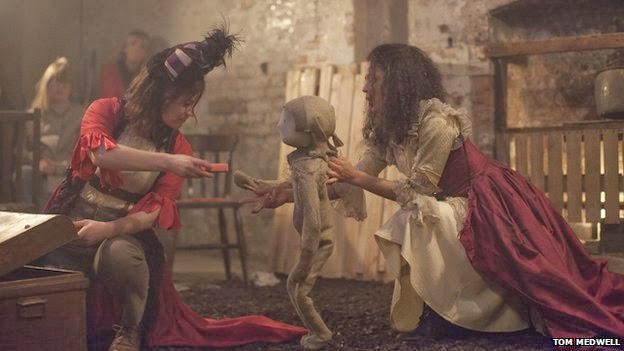 Tom Rogers' designs have made a fun and just-creepy-enough space for the audience to explore, so the show looks as good as the performances make it. The ticket prices are pretty hefty though, and I'm not convinced the show's worth quite as much as it's asking for.

Philip Pullman's Grimm Tales, adapted by Philip Wilson, is booking until the 24th of April at Shoreditch Town Hall.