PREVIEW DISCLAIMER: No idea when the producers are going to risk letting the critics in for this one. 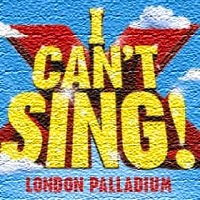 All the press about new musical I Can't Sing! has focused on the fact that it's got songs by Glen Ponder from Knowing Me, Knowing You with Alan Partridge. OK, so strictly speaking none of the press has been about that - they seem to be more interested in the fact that it's a show about The X Factor and has a book by Harry Hill. But it's also true that Steve Brown, who was better known in the mid-nineties as the sidekick whose house band had a different name every week, has brought his musical Savoir Faire to composing the show's songs. All the signs building up to I Can't Sing! were less than promising, from the early previews cancelled due to technical issues to the most worrying fact of all - that this is an official X Factor spin-off, fully authorised and approved by Simon Cowell. To be honest I was planning on skipping this one, but the casting of Nigel Harman as Simon meant my sister wanted to see it as a late Christmas present.

Still, low expectations can be a good thing and I ended up liking I Can't Sing! a lot more than I expected to. Cynthia Erivo plays Chenice, who grew up in a caravan under a flyover, with no ITV signal on her TV. So she's never heard of the talent show The X Factor, but it turns out she has all the attributes needed to succeed on it: A great singing voice and, more importantly, a tragic "backstory" of dead parents and a Grandpa (Joe Speare) in an iron lung, who dies trying to get her to sign up for the competition (but returns Lazarus-like a few times to cheer her on.) 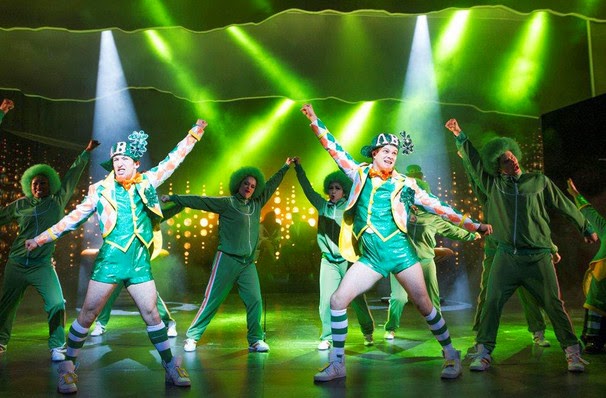 Hill's book is a well-observed spoof of the TV show, with barely-disguised copies of Jedward, Tesco Mary and Wagner showing up, and plenty of references to the stuff the audience isn't supposed to pick up on but obviously does (like the fact the judges decide the song choices, then berate the contestants for them.) Chenice's love interest is a singing plumber, Max (Alan Morrissey,) who ends up being her main competition in the final. And Simon Bailey's Liam is an uncanny impression of Dermot O'Leary. Chalet do a song about his compulsion to hug strangers? Yes he shall. 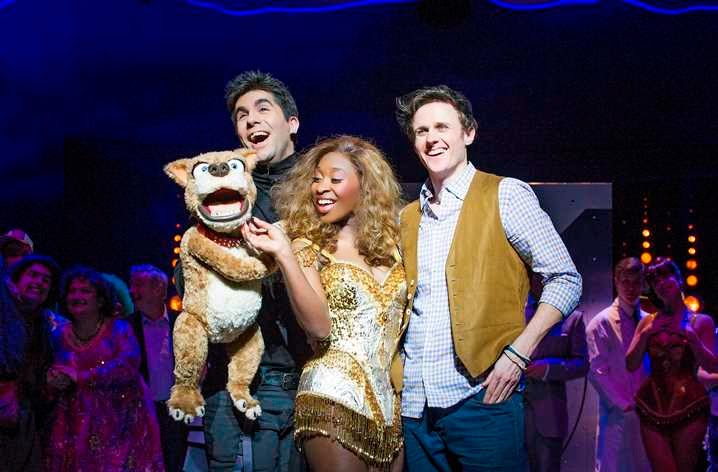 In one of the more obviously Harry Hill touches, the star of the show is Chenice's dog, Barlow, who speaks to the audience but isn't understood by the characters. Avenue Q's original West End Trekkie Monster Simon Lipkin has picked up a puppet again and steals the show with it. Harman's Debonair Simon has a messiah complex and glow-in-the-dark teeth, and is joined by a zimmer frame-using Louis (Ashley Knight) and Cheryl-styled Jordi (Victoria Elliott) whose dialogue consisting entirely of man-pet-man-like-pet makes me think Hill is more than familiar with a certain spoof Twitter account. 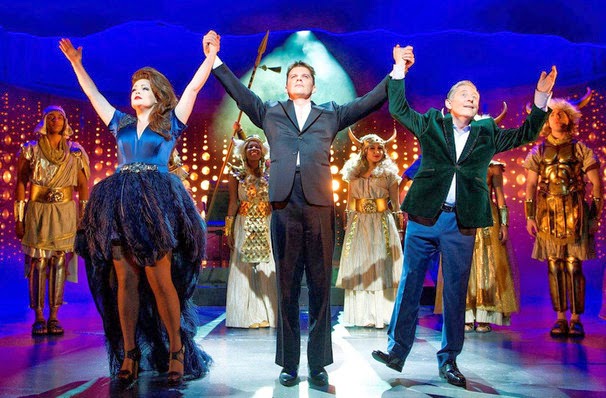 Brown goes for the approach of pastiching various genres for the songs, and Erivo's voice brings the house down. The main problem for me was that the show's too big - Hill's humour relies on a certain makeshift charm that saw him drawing a smiley face on a photo and calling it Regular Viewer Bunty Hoven; the show should be held together by sellotape, not driven around in a Ferrari. It never steers too near the knuckle, which is disappointing - I don't suppose there was ever going to be a reference to Tulisa's tendency to Bangkok around her chops, but a Cheryl lollipop joke should have been doable; and the cancellation of the US version is probably too recent for Cowell to find funny yet. But it's funny enough, well-performed, and director Sean Foley even ensures that the visual gags move around the stage enough for everyone sitting in a blind spot to catch them. For me it's not quite worth the West End prices, which may well be where it struggles to stay open; but it was better than I expected, and my sister absolutely loved it.

I Can't Sing! by Harry Hill and Steve Brown is booking until the 25th of October at the London Palladium.